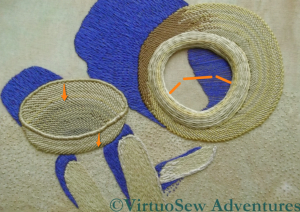 I began by staring at the black and white photograph for a while, and then “Skitch’d” an approximation of the shape of the chipwork inside the Crock. The arrows on the lid are there to remind me that it is quite shallow, and that the back wall and the front wall of the lid should be about the same. The photograph doesn’t show the lid as absolutely full, so I won’t be hiding the base completely, but I do need to remember details like this and bear them in mind. 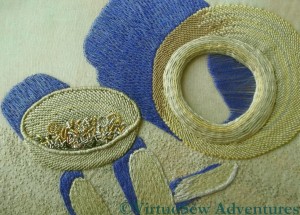 Since the Hoard has been described as forming in effect a jeweller’s cache of materials to recycle, I’ve assumed that it would be a mixture of metals. The Egyptians certainly knew enough about metal to create alloys, and different alloys would be different colours, which enables me to use a selection of materials. The Hoard was composed of ingots and bits and pieces, so none of it has to be perfectly shaped or even especially neatly assembled. 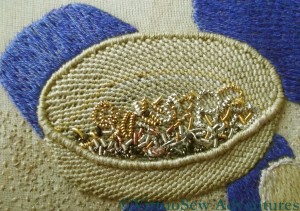 I found some tarnished silver purl – it wasn’t tarnished when I bought it, but I was hoping it would be by the time I used it, so I was very pleased. It helps to create a bit of a shadow around the inside of the front rim of the lid. Untarnished silver check purl and rough purl, and various shades of gold and copper in pearl purl and rough purl help to create the impression of a collection of bits and pieces, broken bangles, roughly formed ingots and general jeweller’s scrap.

Now I just need to work on the chipwork inside the Crock itself. I don’t think that I have the shape of the scraps, even in the lid, quite right, but I am pleased with this as a start, and it will be several days before I can do some more, so I have propped it up where I can gaze at it thoughtfully at odd intervals.