Update on the Crock of Gold – a definite milestone reached 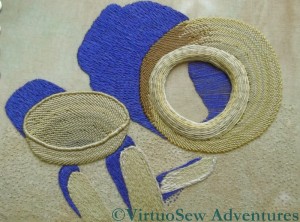 It’s been a month since I posted about the Crock of Gold Hoard, and that is due partly to the intervening holidays, partly to the continuing Saga of the Tennis Elbow, and partly because I am really not good at all when it comes to large expanses of long and short stitch – or indeed any other stitch!

The shadow in the interior of the pot is done very simply in long straight stitches, because I know I will be adding chipwork there, so I want to avoid giving myself too much to stitch through. If I can find a “tarnished silver” or bronze purl to use, that will help to make the whole thing “read” properly, with the odd untarnished chip to sparkle and catch the light. 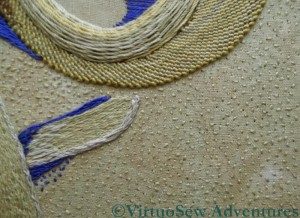 This picture shows the effect of the seed stitches. Although they’ve created a nice grainy background, the scattered seed stitches have slightly “flattened” the colour variation in the background fabric. That’s rather a pity, because the gentle changes in shade were rather attractive. 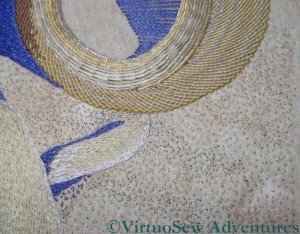 There is always a silver lining, however, and this gave me the opportunity to add a little more detail. The basic seed stitches were done in the same colour as the sticks, using two strands of stranded cotton. For the additional textures, I added “drifts” of tiny seed stitches in a darker shade, using a single strand of stranded cotton, and and then another scatter of them  in a slightly more golden shade. 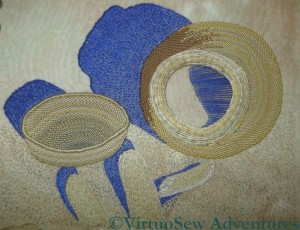 I’ve been wondering whether the looming chipwork might have been making me slightly nervous, because I have been saying that I can’t do the chipwork until the rest of the embroidery is done, and somehow, I’ve found myself adding other layers of embroidery that must be done.

If that’s the case, I think I have now run out of excuses. I need to make sure that no guide lines are showing, re-stretch the fabric, which is sagging slightly, and then screw my courage to the sticking-point.