Found in the Archive – a traycloth

Home | General Posts | Found in the Archive – a traycloth 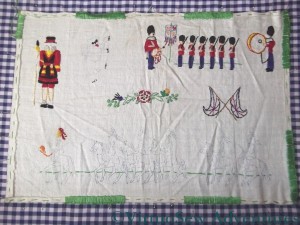 Something Else In The Archive

My mother and I have been trying to make sense of the various boxes and bags that travelled from my grandparents’ attic to my parents’, and we’ve found all sorts of things.

This traycloth must be something that Grandmama began to work quite late in life, when her eyesight was no longer what it had been, because it’s worked in four strands, and the back would not pass Miss Hunter‘s scrutiny. Judging by the subject matter – maybe she began it in 1977 for the Queen’s Silver Jubilee?

I suspect she intended to alternate the colours of the blanket stitch edging to create the same effect as the coloured blocks of fringing on a ceremonial trumpet’s banner.

I rather like the idea of tackling the parade of guardsmen at the bottom, so I’m planning to add this to my list of projects at some point. It would be the only project of which I would be able to say I had finished what Grandmama started!

I daren’t wash the piece or iron it, because the tracing has already begun to break up in some places. The unstitched motif in the top row is a heraldic lion, and most of his outline has rubbed off. It’s really just as well that I was keen on heraldry as a teenager and still have my books on the subject. I should be able to recreate him without too much trouble.

View all posts by Rachel
Eucalyptus Leaves in Canvaswork →
← The Spot Sampler Finished!