Quick Update on The Map of Amarna

Home | Dreams of Amarna | Quick Update on The Map of Amarna 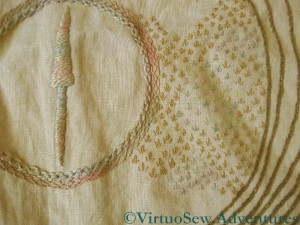 The cultivation on the Map of Amarna will take quite a while to do, but since I’m really quite happy with the progress it is making, I thought I would post a quick update on it.

The scatter of tête de boeuf stitches is as much as I have managed to do since I finally decided that that was the solution I was going to use. Granted, I’ve been working on a lot of other pieces at the same time, and sometimes I am simply not in the mood for single-stitch work, but it’s also more time consuming than you might expect. I’m trying very hard not to use a regular pattern of stitches – the scatter is as random as I can make it, given the human proclivity for pattern-making.

Since what remains to be done is about four times as much as I have done, I expect it will be quite some time before you see it again, but rest assured, I haven’t forgotten…