More variations of Goldwork on the Spot Sampler

There are two more versions of heavy chain stitch here, again using different threads. This time the threads are so different that I snipped out the larger one, on the right, and reinstated it using the finer thread. This photo also shows the detached buttonhole filling with return, worked in the finest of the gold threads. This was rather a challenge as well. I believe it will appear again in the Petite Pincushion, so I will soon get to practise it once more. 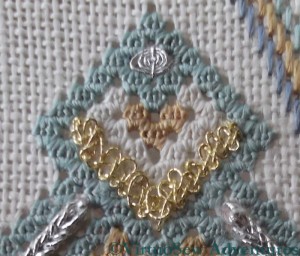 In ordinary pearl cotton, braid stitch is one of my favourites, but in metal thread it is much more of a challenge, especially at a diagonal, and on a fabric which is coarse enough to be much better used in a counted fashion! As you can see in this photo, it creates a lovely rich looped effect – rather like a braid you might use in furniture or to trim a coat, but it doesn’t really bear close inspection, because some of the loops more closely resemble knots!

The tiny four legged spiders web stitch seemed to come together much more easily than the first set I did, so I am clearly getting a better grip on it!

This Guilloche Variation is actually the stitch that most of my stitch dictionaries refer to as “guilloche stitch”, although they generally only have one run of interlacing rather than three. For some reason the thread broke up quite a bit, and I had my customary trouble with the interlacing loops. I wonder whether the relative simplicity of the stitch makes me rush more when I’m doing it?

Figure Eight Interlacing stitch is great fun. I had a little trouble getting the first set of loops to lie flat as they are supposed to, but after that, the stitch just fell into place. This would be another good one for using to represent intricate gold jewellery or ornamentation on my Dreams of Amarna panels.