I spent a lot of time in practising stitched Morse Code, in order to arrive at the best way of producing an ornamental but legible effect.

Eventually I settled on this as the best option. The Morse letters are laid out diagonally, using Colonial Knots and Bullion Knots (respectively the dots and the dashes). I discovered that I could mark up the ribbon with the Morse code one word at a time and then stitch over it, making the work slightly less unnerving than if I had had to work it without markings. 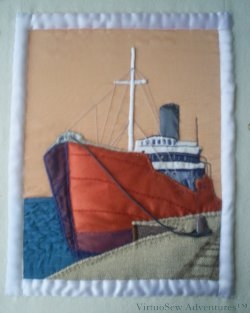 My husband wrote a little programme that took the text, converted it to Morse code and then rendered it as a graphic that I could then print out at the appropriate size. That made it possible to mark up the ribbon before I stitched it. I pricked holes – dots and dashes – in the printout, laid it on the ribbon, and marked the ribbon with a quilter’s pencil. A variation of the prick-and-pounce method, I suppose you could say!

However, before applying the stitched Morse code to the piece itself,  I created a padded border using fine wadding and satin ribbon. I wanted to ensure that the edges of the panel did not show through the border, and as it turned out the petersham ribbon was rather fine and showed everything underneath it.

The end is in sight! And even at this point, I have to confess that I was very pleased with the way this was turning out. I hadn’t expected that it would turn out so well with quite so little upset!