Dreams of Amarna – The Title on the Map

I described the first of the background panels I am planning for the Dreams of Amarna a few months ago. I will describe some of the other stitching I have done on it in another post, but I have been racking my brains since I began stitching, trying to work out how to embroider the title.

The challenge I am facing with the whole map is that I want it to be clear that it is embroidered, not screen-printed, but at the same time, I don’t want to show off every stitch I know or  produce something that is so heavily stitched that it pulls the final pair of panels out of balance. So far, every time I have tried something it has been too prominent or too fiddly or Just Plain Wrong. While this is disheartening, one of the advantages of the butterfly mind is that I could stow the piece away and work on something else while waiting for inspiration. 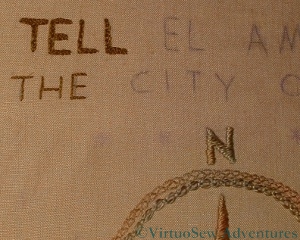 Then suddenly, a few days ago, the Gordian Knot was loosed. I’m using ordinary stranded cotton (two strands) in the darkest shade I am allowing myself. It’s not overdyed or textured, and I am using the same thread for both rows of text.

The large text uses the Chain Stitch with Buttonhole Edging that I learnt in Month Five of the Tudor and Stuart Goldwork Masterclass. I knew it would be useful as soon as I saw it! It is slightly fiddly to work at this scale, especially using stranded thread, but importantly, it doesn’t look fiddly when it is in place.

The smaller row of text below it is in split stitch. This provides a narrow, unbroken line, again clear enough to be readable, but equally not drawing attention to itself. If I decide later that this row is a little too unassuming I can always whip the split stitches!

This now means that I know what I am doing with this panel for a while yet, and can just get stitching on it. Unfortunately the transfer that I made has worn off the centre of the fabric so a large section of map will have to be retraced and reapplied, but that can wait until I have finished the titles.

I’m greatly relieved. I’ve now got plenty to work on while I think of the next idea…