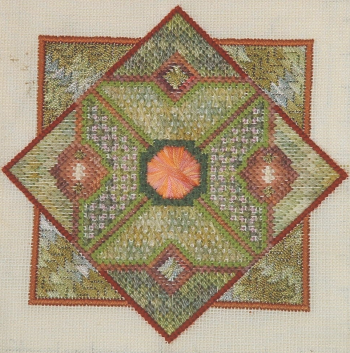 This piece arose from my fascination with the knot gardens and parterres of early formal garden design.

It began with the octagonal Rhodes Stitch at the centre.  I wanted to use the stitch, but not as part of a repeating pattern. In fact it proved much more difficult to get right than I was prepared for. I now can’t remember how many times I unpicked that wretched octagon!

From that central point a variety of little paths and beds radiate out, using slightly subdued colours again inspired in particular by the colours of herbs. The variegated threads are all from Stef Francis, pearl and soft cottons, and a chainette (in the corners). The stitches include Hungarian Stitch, cashmere stitch, and upright cross stitch (which for some reason turns up a lot in my canvaswork).

I realised that the interesting stitches I was using weren’t producing complete coverage of the canvas, but I decided not to worry about that, as I felt it might lead to something interesting.

As you can tell, what it has not yet lead to is a sensible finishing decision. I cannot for the life of me decide what to do with this. It would be a pity to put it under glass, as that wonderful raised boss of the octagon would lose all of its impact. At the same time, because the coverage is so varied, and because the octagon is such a vulnerable point, turning it into a cushion seems positively half-witted.

Take heed, and design your pieces with their end-use in mind!