The difference between this course and a Traditional Goldwork course was that Tracy was less concerned with the techniques of padding and or nue which are familiar from looking at badges or heraldic or ceremonial work. In the Modern Goldwork course, the techniques were more informal and more expressive in an obvious sort of way. It is easy to portray exuberance with threads curling all over the place than when using the design rather than the technique to reflect the emotion. 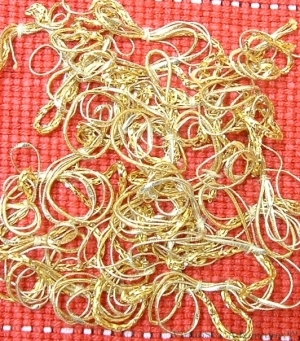 I have chosen this particular sequence to give you some idea of the range of variations available when using essentially the same technique of couched bundles.

For this first panel, we gathered a bundle of several different threads which were then couched down as one, in loose, freestanding loops. This creates an open texture with a high surface. Choosing the types of thread carefully will create a change in the texture.

You can just see in the photograph that the bundle I chose included flat and textured threads. There is even one which looks somewhat like  chainette, which changes the reflectance of the whole bundle. 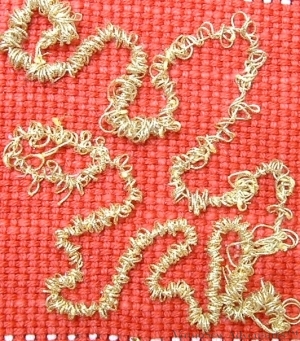 In this second case, Tracy gave us a specific, four-strand thread to use. Three of the four strands of this thread were gathered on the fourth and the resulting  coil couched down as a sort of snake.

The trick here is to use a stranded metallic thread of the right stiffness and springiness to create the neat, regular coils.

You can see that this creates a rough but rather more controlled texture, because the coils are small and neat, rather than loose and floppy like the ones in the first photograph.