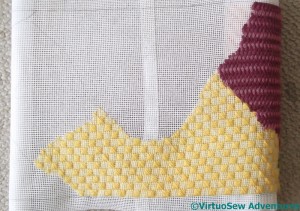 I’ve made something of a principle of alternating the types of stitch as I progress along the Crazy Canvaswork Cushion, so as far as possible a crossing stitch is followed by a diagonal stitch, and a diagonal stitch by a straight stitch. This is part of my strategy for making an abstract, random piece slightly less random, and more under control. 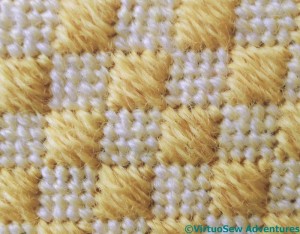 In this case I also needed a sturdy stitch that would help to confirm the “weld” of the canvas, since although it had been tight when I first worked it, the pieces of canvas moved against each other as I worked the earlier sections.

I picked Chequer Stitch because it alternates squares of tent stitch – which will control the two layers of canvas very firmly – with squares of diagonal straight stitches. 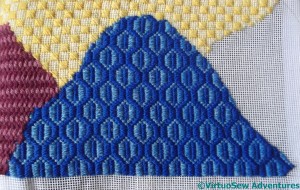 Section Thirteen is actually a fairly simple Bargello lozenge pattern. I realise – rather late – that this may be the only place in the cushion in which I have used a straight stitch pattern, with the straight stitches oriented parallel with the long sides of the cushion. I am going to have to hope that this doesn’t make the section stick out like the proverbial sore thumb when I finally unroll the whole thing! 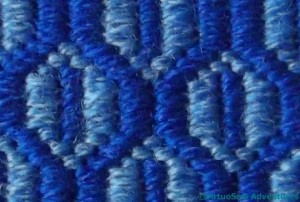 I found the Lozenge pattern in the “Dictionary of Canvaswork Stitches”, by Mary Rhodes, which I must have picked up in a second-hand shop somewhere, and a quick look inside shows it was a library book before that. It’s marked “Copyright 1980”, but I think there is a rather 1970s feel to this pattern. Thank goodness I didn’t choose to work it in brown!