Home | Dreams of Amarna | More progress on Loading The Felucca 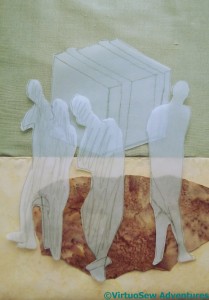 While I was working on the packing case, which is the first embellished section I will be applying, it occurred to me that for those occasions when the light was a little marginal (grey-ish yellow is a difficult colour to stitch in poor light!) I could perhaps prepare a layer that would be applied to provide the shadow on the ground.

I traced the approximate shape and used the tracing as a pattern piece. The fabric is – as are most of them – a cotton from one of the plethora of quilting and patchwork stands I visited during last year’s Harrogate Knitting and Stitching Show. The print gives a sort of scrunch-dyed effect that I thought might help to create the appearance of broken, shadowed ground.

Then I realised that placing it sensibly demanded that I bear in mind the other main pieces. I’ve cut out the tracing I used for the packing case, and the forms I intend to use for the people, and spent a bit of time juggling the positions of each element.

The people, by the way, are not supposed to proper people shaped from an artist’s model. Some of the shapes have extra legs, and one of them is two people blended into one. They will be differentiated by their clothing, or at least so I hope! 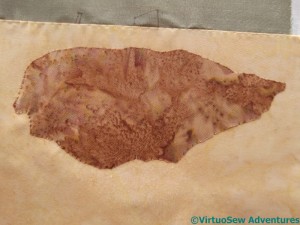 As it happens, attaching the shadow didn’t take as long as I expected. I decided that edging the fabric with blanket stitch would create a hard edge which would counteract the idea of the shadow going over broken ground. I may even choose to add stitching to break up the edges even more when the figures are in. I have learnt over the past few years not to overdo detail on one section of a piece like this until I have some sense of how the whole thing is going to turn out!

I am expecting to crop this piece very close, to concentrate attention on the figures and their burden, but I learnt with the Camberwell that it is easier to have some leeway around the edges of my project!