More on the Packing Case

Home | Dreams of Amarna | More on the Packing Case 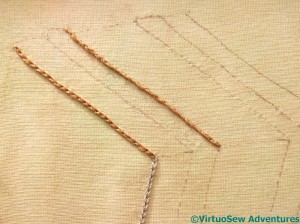 Having unpicked my experiments, I decided on a new approach..

Actually, a digression here. A lot of people talk of test-stitching, by which they mean trying something out, but not on the real thing. I did that with all those goldwork stitches in the Tudor and Stuart Goldwork Masterclass, but as a general rule, my experiments do happen on the project itself. As much as anything else, this is because it is the interaction between the fabric, the design, and the thread that I am experimenting with, and if I take one of those out, I’m not testing what I need to test. I have a picture in my mind of the effect I want to achieve, but it is rarely detailed enough for me to know what to do at every point before I even begin. Instead, I rely on the project to tell me what it wants next, and while some projects are sullen (they know who they are!) others are talkative beyond belief. This one, so far, occupies the middle ground! 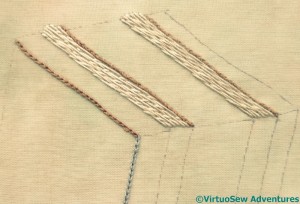 Since I had decided on how I was going to work the reinforcing boards, I decided that it might – possibly! – make sense to work some of the dark shadows to help me with their edges. I’m using the warm brown as the dark edge on the top surface, to keep the sense of bright sunshine, and the greyish colour for the front surface which is in a more even shadow. I will be combining the grey and the yellow in the reinforcing boards to help confirm that effect. 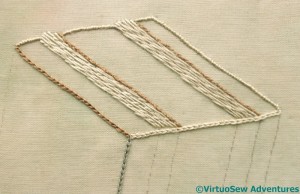 I also need to make sure that all the edges are clear and won’t fray. A packing case holding delicate antiquities should be a solid looking object, not one suggesting that even a gentle tug will take it apart! Just to give that sense of solidity, I have worked an overcast trail along each of the top edges that will be cut, whereas the edges that are within the piece of fabric are worked in reverse chain stitch. So far..