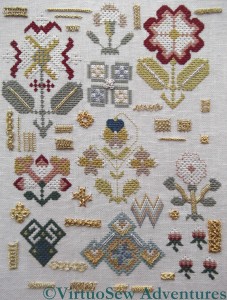 My first post on the Tudor and Stuart Goldwork Masterclass was dated 7 May 2010, so the course has taken me about 22 months, rather than the eighteen that Tricia planned it for. That’s not too bad – I thought it would have been much longer.

I’ve finished the spots and stitches as designed and laid down in the course, with a few small additions. I’ve done several sections of Plaited Braid using different metal threads, as well as having another go at Diagonal Half Guilloche stitch, down at the bottom. The picture is quite high resolution, if you want to zoom in and have a closer look..

I don’t usually practice stitches very much, but some of these stitches look and feel so different in the various different threads that it’s become clear to me that on future projects, I will have to test all my metal stitches with the thread and fabric I intend to use. 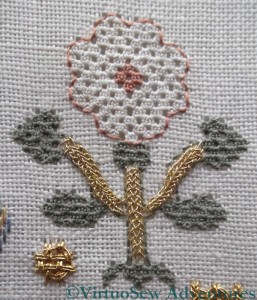 I also realised – at the last moment – that I hadn’t done possibly the hardest bit in the whole thing, that is, the curved stems of Plaited Braid Stitch for this flower. That was difficult for several reasons, but partly because I spent a lot of time trying to get the frame in the right position to allow me to work the stitch as I had practised it.  I chose the very finest of the metal threads in the kit, and in the end I discovered that I could work the stitch quite effectively not only as I’ve practised (horizontally), but also at an angle, working away from me. It’s worked quite well, and I enjoyed wrestling it into some sort of sense, but I don’t yet feel that I can work Plaited Braid stitch with ease or grace. Maybe that will come in time. In truth, I think being able to work it at all is a considerable achievement!