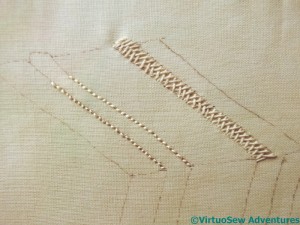 Since appliqué is a layered technique, I had  to work forwards from the most distant object. For this subject – once the background was in place, that was the packing case.

The first thing I had to do was to work out how I was going to represent the lengths of wood running as bracing all around the box. My first thought was to use reverse herringbone stitch, as I did for the contour lines on the Map of Amarna, but as I was stitching it I became less sure.

I worked the other band in ordinary herringbone stitch, then sat back and frowned at the frame for a while. 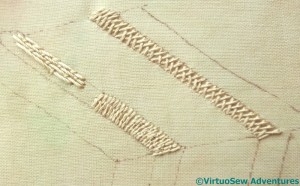 I tried variations on couching stitches  – Bokhara Couching and Roumanian Couching, in the lower half of the nearer band – and was no happier.

Just as well I enjoy these puzzles, isn’t it!

Finally it occurred to me that the grain of the wood would be running lengthwise in these pieces of wood, while in the planks that make up the box, the grain would appear to run across the box. The stitching I had tried had given the impression of the grain running across the bracing struts. So I tried Bokhara Couching again, but running lengthwise.

That’s better, I think, but the next task is all that unpicking. 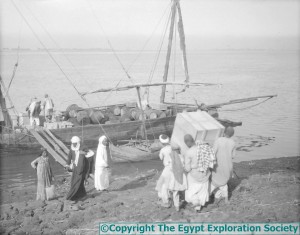 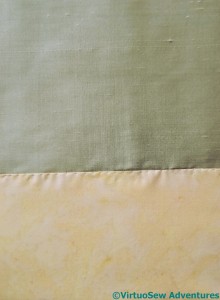 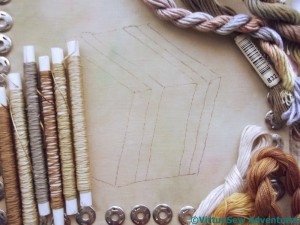