There’s a reason I don’t do much counted cross stitch these days!

It’s repetitious, and samey, and it doesn’t offer the chance to play with texture and pattern that I get in other techniques.

In this case, add a fourth – working on aida which is already set into a bag, and a bag, what’s more, that is complete, and since the bottom of the bag is a fold and not a seam, I can’t even unpick it to make it a bit easier to work. This bag has been fighting back with every stitch, and reminding me why I laid it aside.

And finally, after what felt like weeks of doing nothing else but this (which isn’t even remotely true, let me reassure you!), I’ve got the bag finished. All of the aida is covered, even the white clouds. But there are no loose threads on the back, and if I have doubts about some details, I’m not about to undo them now. It’s taken nearly thirty years to get this far!

On to happier things: Episode 34 of #SlowTVStitchery is now live! In which the final corner is finished, and inklings of new ideas arise…

This one is a cotton fabric bag with a strip of aida inserted in one side, which I think was a subscribers’ gift for Needlecraft magazine, some time in the distant past. In DevaStitch Designs days, I created a range inspired by the Bizarreware of Clarice Cliff (with the approval of Wedgwood, the rights holders), and I suspect that my original idea for the design was to add it to the range.

And then something happened and the bag disappeared into a box for what feels like centuries. I’ve found it again, and this time I am determined to finish the wretched thing, and start using it.

It has become clear that the aida is slightly off-grain, but it’s not likely to show when the piece is in use. If I were to make a bag with a cross stitched element I would work the cross stitch separately and apply it afterwords, so that the straight grain was indeed straight.

The first thing to do was to finish the black outlines, which are such a distinctive part of the Clarice Cliff style, and which will make everything else simply a matter of colouring in.

I had to invent a bush or two, because my chart didn’t cover all the fabric I had available, but once the windmill and extra bushes were in place I continued with the sky.

Then I got slightly tired of blue and gave myself a bit of a rest by filling in the windmill. I have more to do, of course, but I think it will be quite cheerful when it is finished.

SlowTV Stitchery Episode 31 is now live, in which progress continues to be made, and some thought is given (again) to the eventual mounting of the piece.

Another Design Inspired By Clarice Cliff 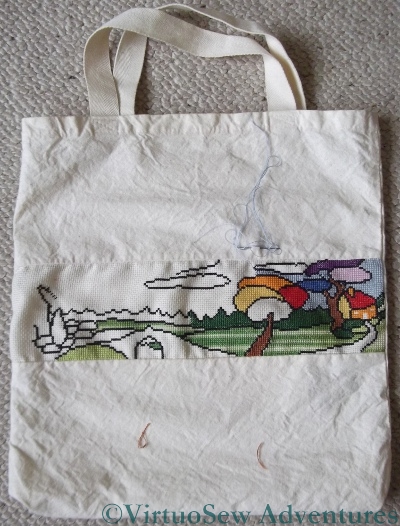 This cotton tote bag with an aida panel across the front was a free gift with a magazine, several years ago. It must have been about the time I was designing the series “Inspired by Clarice Cliff“, and it probably seemed a good idea to cover all the aida, rather than having threads stretching across the back of the stitching.

It’s a real trial to stitch, though. I’m not at all surprised it ended up at the bottom of the workbasket. If the handles don’t get in the way, the rest of the bag does. Since it is made without a seam at the bottom, I can’t even release the seam to make life easier, although I admit that doing so might not help as much as you’d hope.

Here is a close-up of the design as far as it is stitched. I’ve used Anchor Stranded Cotton, and the variegated thread is one of Anchor’s standard variegated threads. I’ve stitched the primary section in that thread in two phases of half-cross stitch, to spread out and change the colour effect a little.

This is going to be my “travelling project” until it is finished, as when I sort out the threads it should be quite compact, and it’s not such fine and delicate stitching as most of my other current projects. As I don’t travel regularly, it will be a while before you see it again. 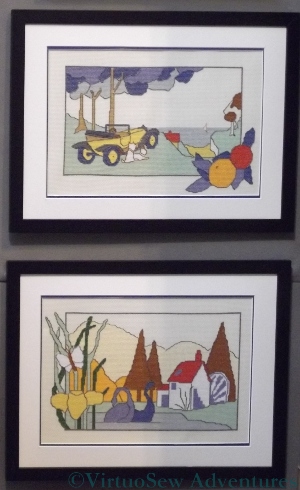 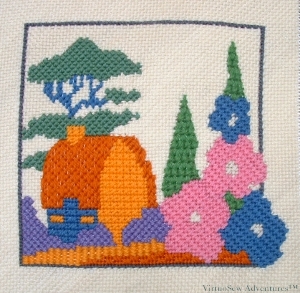 Emboldened by the combination of fun and applause (admittedly only from my parents at that point!), I moved on to the “Hollyhock House” design from the series of Designs Inspired by Clarice Cliff.

Again in two versions, and again I haven’t photographed the tent stitch cushion.

Hungarian Stitch is another of my favourites, and you will notice that there is still more Cashmere Stitch, Diagonal Mosaic Stitch and Upright Cross Stitch. I chose to work the poplar-like trees in a Sheaf Stitch variant, which I think was not hugely successful, but an interesting experiment. The background is Linen Stitch (diagrammed on my post about The Lady By the Lake) as it doesn’t obtrude, but it does cover the canvas thoroughly.

At some point soon I should find a suitable thread for the outlines and then finish these two. Then I can turn them into cushion panels or something and move on… 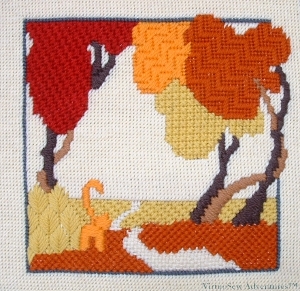 The Cat Who Walked By Himself

I’ve done some counted cross stitch designs for Classic Embroidery, and on Tuesday I went to a trade show in the NEC, Birmingham, to see the designs up on the stand, and to talk about other possibilities for future designs and future collaboration.

It was so satisfying to see the designs, beautifully mounted and framed, and to hear that they are already selling!

I don’t think my designs have made it to the Classic Embroidery website yet – we only got all four ready to go a few weeks ago, and making kits is the higher priority at this time of year – but they are also going to send me a kit so that I can see how the designs are packaged.  I’ve already seen some of their kits so I am confident that they will look good.

The designs are inspired by Clarice Cliff, although there is little about them which is even close to any of her designs. From top to bottom, they are called