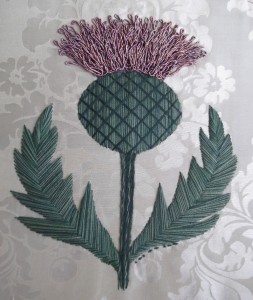 Well, I decided in the end to unpick the silk pearl purl. I was extremely disappointed about that, because the whole idea of this project was to provide an underlayer for the pearl purl.

On the other hand, I do think it turned out rather well. The gold and viscose gimp makes a beautifully tangled, almost “fluffy” head – there’s something like 10 metres in that head, an entire skein of thread, uncut, and twisted back on itself in little one-inch fronds.

Even if I did feel as though I was using my pins more like a windlass!

The three shades of green wool break up the otherwise rather monolithic leaves and I’m very pleased with my fishbone stitch variation. I took care to make sure the two strands I was using lay side-by-side rather than twisting up, but in truth that wasn’t much of a problem. 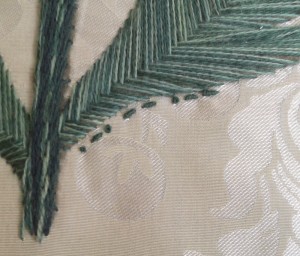 The stem I worked in raised stem stitch band, incorporating rather more of the dark thread, and trying  to make sure that I didn’t catch any odd bits of the felt – harder than it looks!

Finally, having decided that my planned embellishments (the silk pearl purl) were blemishes rather than embellishments, I took them out (cautiously) and signed with my usual Morse Code initials…

I didn’t have any plan for this piece, but I’m so pleased (in spite of my disappointment!) that I’m quite seriously considering framing it up.

Progress on the Thistle 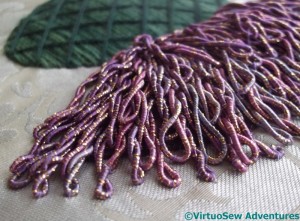 I rather like the texture of the layers and layers of viscose gimp, in this photo. Every now and then an oblique view is exactly the right one, and it’s a gorgeously over-the-top effect, isn’t it!

I did find myself beginning to feel rather tied in knots by all the twisting and turning, and progress slowed noticeably as the number of layers increased and the difficulty of holding the strands just firmly enough also increased.

Worth it, though, I think! 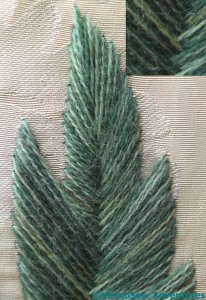 The leaves required some slightly careful management. I wanted to use fishbone stitch, because I wanted a simple leaf so as not to detract too much from the flower. However, fishbone stitch does use rather a lot of thread, and I was just a little nervous about whether I would have enough of my lovely wool to do the job.

So I thought, first of all, that I would use the light and medium shades together. They aren’t flat, solid colour; they shade a little either side of the main colour, and this brings a little variation to what might otherwise have been a somewhat monolithic element.

Then, secondly, instead of taking the thread across the back from side to side, I devised a variation which changed slightly the pattern of the crossing in the centre. You can see in the detail in the top right hand corner, that there are two sets of threads in each section. There are only small back stitches running down the outside edges, and down the vein in the middle, so the amount of thread on the back has been minimised. 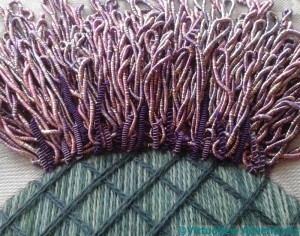 Not At All Happy

I originally hoped to use the layers and layers of viscose gimp as the base for another layer, of silk wrapped pearl purl, and of coloured wire purl.

Unfortunately, when I’d done it, I decided that I really didn’t like it at all.

It adds nothing to the design, and in fact, it even detracts from it. Out, out, out!

So having taken it out, rather grumpily, I sat back to consider whether or not I have finished the piece at all…. 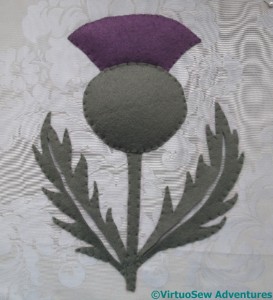 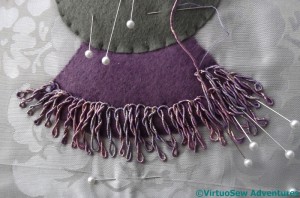