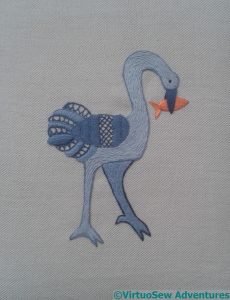 I can’t remember where I found the basic outline of this heron. There’s something a bit late-medieval about him, and I found the various shapes a good way of playing with interesting stitches. He’s worked in crewel wool, apart from the orange-gold fish in his beak – that’s silk!

The main, flat colour sections of his body are worked in split stitch filling. This isn’t a technique I’m especially fond of, but it does fit in well with the style of the drawing, and it provides a plain filling that allows the trellis couching over his wing, and the half-chevron stitch in his tail to be the stars of the show. 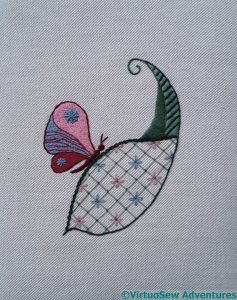 The butterfly settling on the huge leaf in this second panel also makes use of split stitch filling, with the roundels on the wings working in spider’s web stitch, and the antennae in a single fly stitch. However, the whole reason for creating this design was to have a large space to fill with the ornamented version of trellis couching. I believe that classically, this stitch is worked much smaller and more densely, but what I was trying to do here was to marry the old style with more modern sensibilities, and opening it out creates a crisper, lighter effect.

I’ve not been able to work out what to do with these, either. They’re mounted over board, and waiting for inspiration! 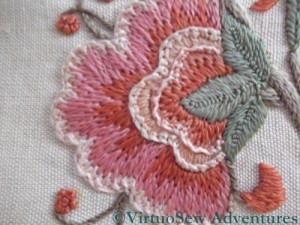 Flower 1 on the Jane Rainbow Kit

The raised edges of the petals of this flower are produced by working one row of blanket stitch along the edge and then working detached buttonhole stitch into that. It creates a fairly subtle effect in real life, and it’s always satisfying to see small details like this appearing in kits.

You can also see in this close up that although I was beginning to get to grips with satin stitch, my Long and Short Stitch wasn’t very good. 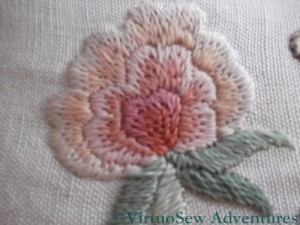 Flower 2 on the Jane Rainbow Kit

Really not very good, in fact! The stitching on the second flower looks more like brick stitch. I think this is the only bit of the design I didn’t enjoy doing, and that’s entirely because I simply could not get to grips with Long and Short Stitch. No-one had told me to think “Long and Longer”, which is what has cracked it for me since then.  Besides, working a colour change into such narrow rows is not the easiest way to tackle Long and Short stitch! 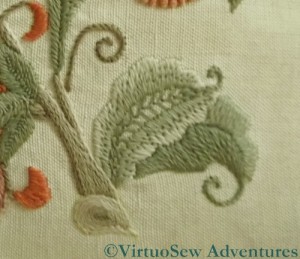 Leaves and stems on the Jane Rainbow Kit

The leaves in the bottom corner worked well, too. The openwork at the centre of the upper leaf makes a nice contrast with the rest of the design which is very densely stitched.

I did enjoy working this – even if it was finished at the speed of lightening! 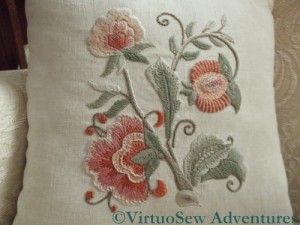 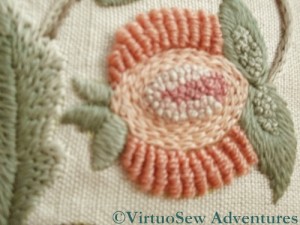