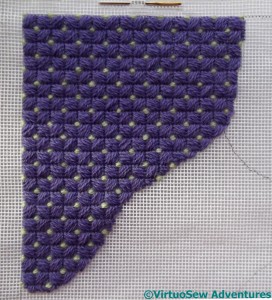 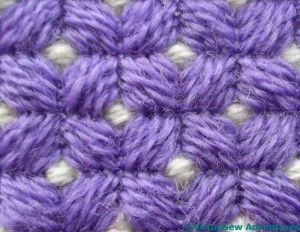 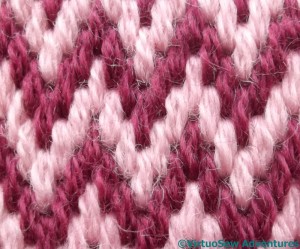 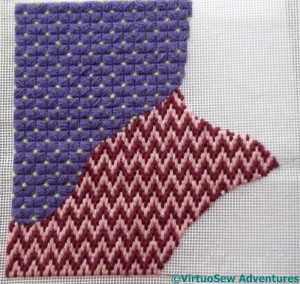 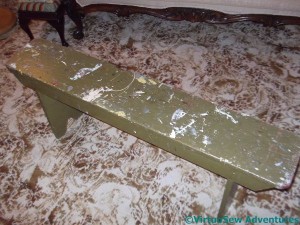 I very much enjoyed working the Stones of Venice footstool last year. It was really lovely to have something that I could pick up as a relief from the fine silk and metallic threads in the Hittite Amulet, and my various Thistle Threads courses. Furthermore, at this time of year, something I can enjoy in the evening without switching on my daylight lamp is a good choice for those days when I haven’t managed to stitch during the day but have been longing to.

Naturally, I’ve been casting around various family homes, looking for a destination for the canvaswork once completed. And I’ve found it – in her studio, my mother has an old form (a bench) which she remembers from her childhood home in Westmorland. It’s shabby and tired now, but giving it a good sand down and a fresh coat of paint will work wonders, and a long cushion will make it altogether more comfortable to sit on. 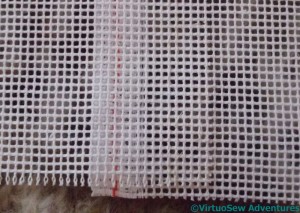 We’ve decided that this, too, will be a stash-buster, insofar as that is possible, so I’m going to have to weld my canvas together (bear with me!) and the inspiration for the canvaswork itself is to be Crazy Patchwork. I’ve been told to make it look Cheerful.

It is fairly simple, but a little time-consuming to “weld” canvas together. Create an overlap, lining the canvas up to match the holes, then stitch together by making several lines of whip stitching along the length of the join. Trim off any superfluous selvedges, and you should find you have a secure join that is almost unnoticeable once the decorative stitching is applied. 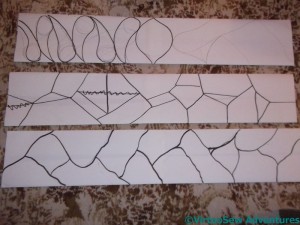 Since I am trying to use up a rather peculiar collection of wools, the leftovers of an assortment of projects that were never intended to live together, the theme of Crazy Patchwork seemed the most promising.

What it wasn’t, was Easy To Plan. You can see that in the top variation I ended up trying something very much more formal, a sort of paisley pattern layout. I like it, but not for the purpose of this particular cushion. It might work better for a piano stool or something in a similarly formal setting.

Then I tried a layout with straight edges, and was less than happy with it – there’s not enough sense of rhythm or flow in the design. The layout with wiggly lines works rather better, and I’ve settled on that, drawn it onto the canvas, and attached my canvas to a frame.

The form is nearly a metre and a half long, and about 20 centimetres wide. I’m now wondering whether I have a stash big enough for the task!