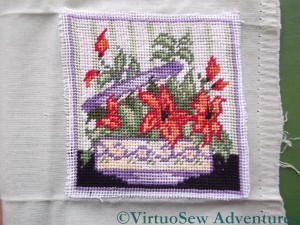 I keep on finding things that I’ve not quite finished, don’t I – and in some cases I had completely forgotten about them.

Like this one. I know it was a kit – stranded cotton worked in half-cross stitch on canvas, – but I don’t know why I bought it.

And I clearly had something in mind for it, because I have attached it to a cotton furnishing fabric. Equally clearly, it wasn’t going to be a cushion centre, or I would have centred it on the fabric. It is only about three inches square, so I suspect I had in mind making it into a needlecase.

But before I do anything else with it, I have to find some way of covering those raw edges of canvas with something that looks deliberate! 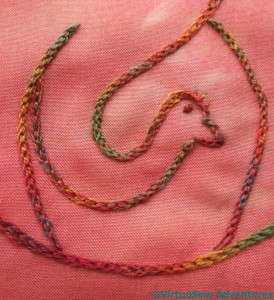 In other news, though – I’ve finished the second Crane!

Actually, you may recall that it was the first, but I decided it looked too overheated in the pot it was destined for, and set it aside for another version.

I found in when I was looking for something else, and finished it. At least, the embroidery…

I will probably mount it on a circle of card, and put in that famed Winter Decoration corner.

At least I know what I’m going to do with this one!