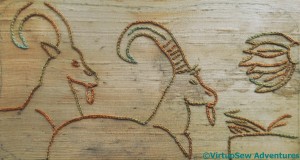 That didn’t take as long as I expected. Reverse chain stitch goes quite quickly once it gets started.

I am not at all sure what the elements to the right of the Antelope are intended to represent, but in the interests of completeness I’ve included them anyway. 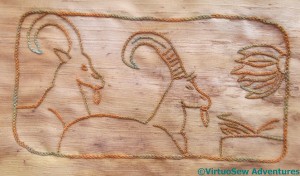 And furthermore, I’ve rather fallen in love with it – the intricate braided effect excites all my imaginative faculties! 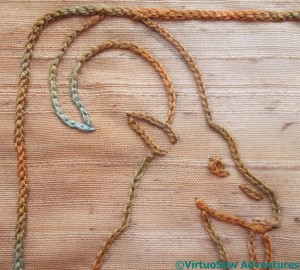 One Antelope Close Up

The slubby, handpainted silk is rather reminiscent of the sort of papyrus that tourists bring back, but rather than the garish coloured designs that are painted on those sheets, the subtle variations in the silk thread pull the impression back to resemble the stone in the original photograph. I also rather enjoyed the simplicity of a single stitch and a single type of thread.

I was really pleased, when I took this close up, to see how even the stitches were. This evenness hasn’t, in the past, come naturally to me – anyone who has ever received a handwritten letter from me will know that – but I think all the work on Thistle Threads Online University Courses is beginning to pay off!

Dreams of Amarna – The Antelope Panel 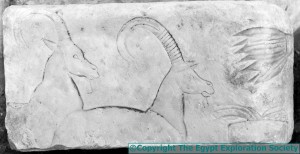 When I finished the Hittite Amulet, I didn’t have another piece ready to go, but feeling a little jaded with metal threads, I didn’t want to move straight back to the Tudor Rose… So I went rummaging in the wonderful selection of photographs that the Egypt Exploration Society allowed me to have copies of to use as reference, and found a photograph of a small piece of stone, carved with part of a frieze of antelope. 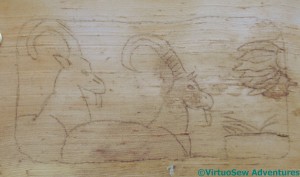 I transferred the design onto some handpainted silk using the prick-and-pounce method, and went over the lines with a pencil, then framed it up over a calico backing, picked out a skein of hand-dyed twelve strand silk and thought about stitches.

In the end I decided that what had attracted me to the photograph was the simplicity of the lines against the slightly uneven texture of the stone, and so I should make my version absolutely simple too. 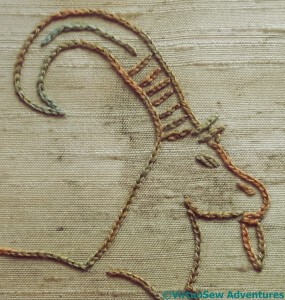 I am thinking of using Hungarian Braided Chain, which I worked on the Crane Pot, for the edge, but I am also considering the possibility of not stitching a frame at all, but instead stretching the silk over a piece of skirtex cut to the shape of the stone.

This is a real contrast with the Glittering Nightcap – very simple and very “minimal”. Almost like a palate cleanser after a heavy meal!