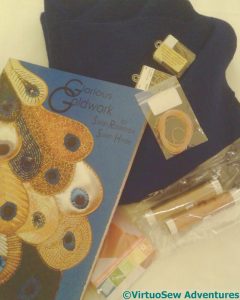 The Knitting and Stitching Show in Harrogate has been a yearly treat ever since I first went there. It’s a chance for friends to gather to talk about embroidery (or anything else, in the case of my lunch with Elizabeth from Sew In Love Stitch Art!) or to make new friends, to stock up on weird and wonderful materials you can’t get anywhere else, and to look at exhibitions and go to workshops.

Oh, and I have breakfast in Bettys of Harrogate, which is a treat in itself!

This year I had a very short shopping list, and managed to get almost all of it on Thursday night! I got a copy of the new Goldwork book produced by Sarah Rakestraw and Susan Hinde of Golden Hinde Goldwork – signed by the authors, no less! – as well as having a long conversation with them both that resulted in a few ideas for unlocking my logjam with Akhenaten. I also bought a couple of threads that I hope will make it possible to try again to create the uraeus on his crown. The book is a good, thorough work of reference that will be very useful in the future. Yes, I know I already have others, but you would be amazed how often someone’s explanation fills in the gap in someone else’s! 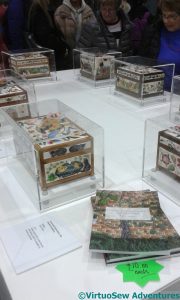 I also found some light navy blue wool (lighter than it appears in the photo), which I hope will provide a background for the panel of The Golden Fleece, if I get to it before the Conversion of Placidus (or maybe even after…!) and a couple of reels of silk which I hope might help me to do another version of Akhenaten’s face. It’s not really strong enough as yet…

One of the really striking exhibitions was entitled The Needle’s Excellency, a display of stumpwork caskets worked by Nichola Jarvis and her students at the Ashmolean Museum. They are beautifully worked, the tops all largely similar, and all the sides worked in different designs created by the students from episodes in their lives or motifs they particularly liked. I believe there are thoughts of running the course again in a couple of years, so if you are interested, keep an eye open!

Finally, there was, of course the Harrogate edition of the “100 Hearts” project of the Embroiderers Guild. There were some old friends I recognised from the exhibition in Liverpool, but most of them were new to me, and there were some fantastic pieces of work, providing food for thought and some pointers to yet more untold stories.