As I got further on with the vessel, I decided I could no longer put off a trip to the north east to have a good look at the Priory for myself. It was a breezy day, so the light changed a lot, and I was nearly blown off the pier into the sea, but I got about 250 photos, so I hope to have enough to provide a basis for my depiction of the Priory. 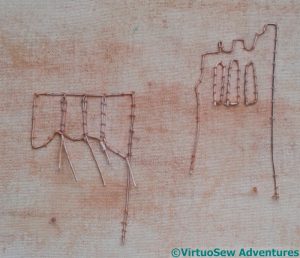 Wire outlining Slips of the Priory

Unfortunately all those photos haven’t really helped me to settle on how I am going to represent the priory. I am going to have to do Something, and see whether the Something unlocks the floodgates of ideas that I need. One thought is to make slips to give the Priory some more of a three-dimensional feel, so I’ve started by roughly colouring the base fabric and the paper-covered wire, including outlining the window-slits. 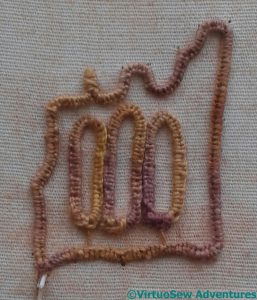 In other cases, the wire edging is often done last – as I did myself with the Stumpwork Violets – with the edge of the blanket stitching facing outwards. In this case, I really don’t want the edge emphasized, so I’m hoping to use that looped edge to sew into instead. The edges of the window outlines are rather nestled up to one another, and they’re so small I didn’t even attempt to do separate top and bottom tiers. Quite how well that will work, I’m not at all sure, but then it’s all an adventure, isn’t it! 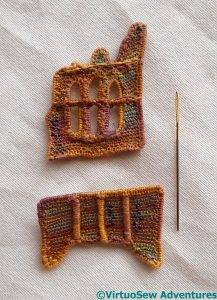 After a couple of days of concentration, this is what I finished up with, together with a needle to help you get a sense of scale. And after all that care to colour the fabric, I ended up using needlelace. The main thread is a variegated stranded silk, but once I had detached the pieces from the base fabric I stitched in again to add some more detail. Whether it’s enough detail, or the right detail, is another question. That decision can wait until I have the rest of the headland done, I think.

View all posts by Rachel
Tynemouth Priory, Second Installment →
← Details of the bridge and crew quarters