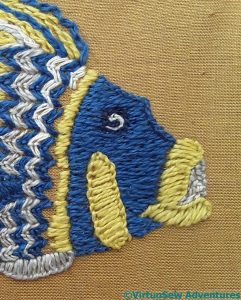 There was a pause after I got the dorsal fin done. His lips and gill markings, and the pectoral fin, are all worked in blanket stitches, nesting them to outline the shapes in some cases and putting the edge where I wanted the firmer line in others.

I don’t have a dark enough linen thread for the dark of his eye, so the chain stitch spiral is of linen (the white) but then the dark is the navy silk perle I used on Nefertiti’s headdress. It works pretty well, I think. It looks as though he’s rolling a beady eye to watch someone he has his suspicions of!

I decided not to do anything too complicated for his head – simple irregular brick stitch. I didn’t want to split the threads, but I did my best to create a smooth surface. 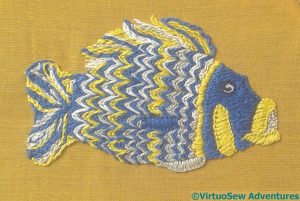 When it came to the dragged stripes on the body, there was another pause. I knew what I should probably use, but I had to persuade myself that there wasn’t anything better. The last time I used stacked fly stitches (the fourth panel of the Persian Fantasy, which I did about twenty years ago and blogged about when I started blogging in 2010) the wretched things nearly drove me up the wall!

I think the fly stitches were better than other choices – although one of these days I may take the combed pattern as the inspiration for some Bargello work. That said, I’m not sure I like my Fishie as much as I expected to. His tail fin took some wrestling with, and doesn’t have the “flow” I was aiming for. It’s very possible that in a few months he’ll be fished out (sorry!) and reworked somewhat.