Lady’s Magazine Stitch Off – A Traycloth 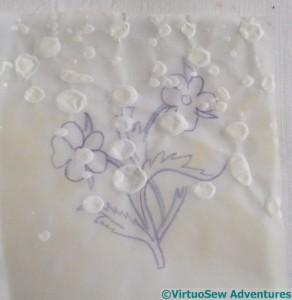 One of the few things that made being poorly tolerable when I was a small child was the way my food arrived – on the good china, on a tray, covered with a traycloth. A hand embroidered traycloth, no less!

It wasn’t enough to encourage me to malinger, I hasten to add. But anything to give the invalid a lift…

Not surprisingly, the family stock of traycloths is somewhat reduced since those days, many of those traycloths having disintegrated after long and faithful service, so I though that I would use some of the flower sprays found among the Lady’s Magazine Stitch Off patterns to embroider some more.

I decided to make my own transfers, and promptly discovered a forgotten hazard that I should have added to that post on Transferring Designs. Whatever you do, if you are using a steam iron, Switch Off The Steam! Not only is the transfer not usable again, it didn’t work the first time! 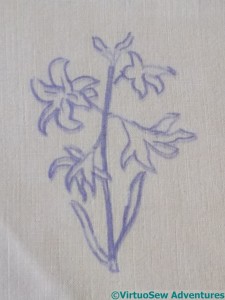 Once I’d got the steam switched off, things improved, and I got two sprays transferred onto diagonally opposite corners of a traycloth I found lying around, unadorned. It’s linen, too, so I’m amazed it has taken me this long to embellish it! 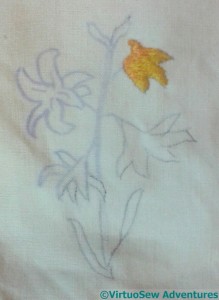 I’m no botanist, so I can’t hazard a guess at the flower this is intended to be. It may not be intended as anything up a pretty combination of shapes, of course, in which case any eccentricities of stitching are unlikely to matter very much..

I’ve decided to go for some bright, cheerful yellows – to cheer up any invalids who might see it!

View all posts by Rachel
A Pause In The Modern Stitch Off →
← Azorean Cutwork Finished At Last!