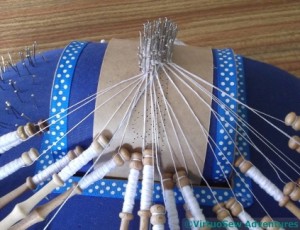 Another report from my mother on the project to clothe Topsy..

Topsy’s dress is going to give me a reason for stitching and lacemaking. I have done some torchon lace but I want to learn a new kind of lace – Bucks Point. Lace making looks far more complicated that it is, at least when using simple patterns. There’s lots of guidance, since the design is pricked out (literally) on stiff card, often with little symbol to help you remember which stitch you are doing. The bobbins’ weight provides the tension, hence the decorative beads, and in all the patterns I have used so far, I was working with only four bobbins at any one time, even though there may be twenty, thirty, forty bobbins in the design.

I have chosen the very simplest pattern, just the new “ground” and a “cloth” fan. For none-lacemakers, the ground creates that part of the design where you are just space filling, in this case it joins the fan to the footside (the straight edge which will be used to mount the lace on cloth). The cloth stitch is made by a weaver pair of bobbins going under and over the other threads just as if you are weaving cloth. The complication lies in remembering the sequence of stitches – it took an hour and a half to work out the sequence for one fan and attached ground. Since the design is a simple repeat, the next one took three quarters of an hour with much referring back to instructions. Six fans on, it takes half an hour with just occasional glances and I am looking forward to cutting down the time as I continue. There is a long way to go as this piece is to edge Topsy’s petticoat. I have more ambitious plans for the dress itself. 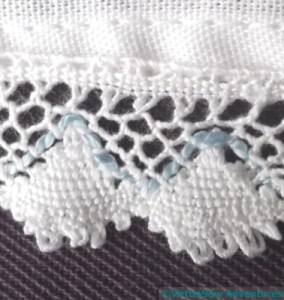 It took four months, but I completed the first length of lace and attached it to Topsy’s petticoat. And I am pleased with the result. It’s neat, decorative, not flamboyant – just what I wanted. The first two or three sections are a bit wobbly but thereafter the pattern becomes more crisp. The blue gimp will echo the embroidery on the dress.

I had some difficulty in remembering not to cover the pin in this style of lace making, since doing just that was an essential part of all the Torchon lace I have made. But once I’d mastered that, the ground became easy to do, and, of course, the fan was worked exactly as I had done in previous lace making. Heartened by this, I felt I was ready for something more complicated.

View all posts by Rachel
Inspired by Spring flowers.. →
← Stitching the Christmas Angel