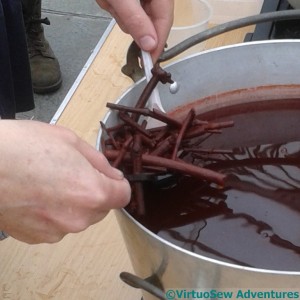 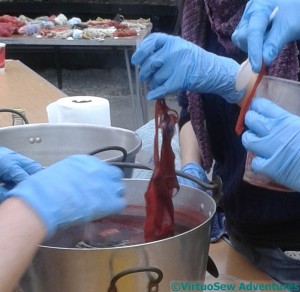 Out Of The Bath

I did study the techniques of dyeing and printing during my degree course, but that was industrial printing and dyeing, on a vast scale and using chemical dyes. Using natural dyes and working on a smaller scale will be a whole new adventure. It isn’t as consistent, but then that is the charm of it. 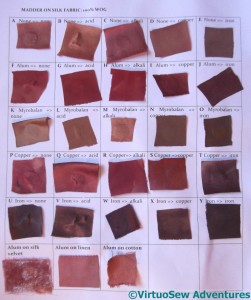 25 Shades of Madder On Silk

A Welter of Wonderful Wool

So off I went, rummaging through the interwebs for an introduction to natural dyeing and finally found it via Twitter, in a workshop entitled “Twenty Five Shades Of Madder” in the Glasgow Botanic Gardens given by Julia Billings of Woollenflower. It was fascinating, and gave me much to think about.

Mind you, I might have given Julia and all the other lovely ladies on the course something to think about as well, because I had my quotation from Pliny in my notebook to explain what an embroiderer was doing at a workshop, run by a knitter and attended largely by knitters.

25 Shades of Madder On Wool

It did more than explain – everyone’s imagination went into overdrive! The idea of multicoloured fabric coming out of a single dyebath clearly enchants everyone, not just me!

So now, I have a list of books and DVDs to look at, and suggestions of other people to get in contact with or research – and someone to ask for help if it all gets too much (thanks, Jules!)