The Second Crest for the Dig

Home | Dreams of Amarna | The Second Crest for the Dig 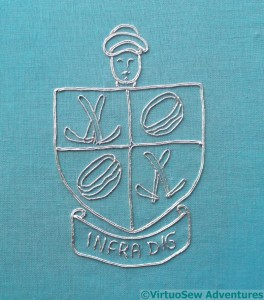 Last month, I had made several unsatisfactory trials with silver thread, and took my headaches to the Harrogate Knitting and Stitching Show to ask advice on the Golden Hinde stand.

I got to the show with about 40 minutes to go of the Thursday evening late opening, which meant that the aisles were relatively clear and I could actually talk to Sarah. After some discussion, we came up with a very bright and blingy silver Jap. In fact it’s so bright and blingy as to be verging on mirrored, and I was surprised at quite how calm it looked when I finished it. 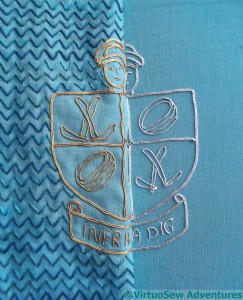 The reason it is so bright is that the metallic wrapping film is much broader than it was on any of the other silver threads I tried. That carries its’ own penalty, because turning corners becomes trickier – and indeed, in a few cases, rather untidier (click on the picture to enlarge it and look at a few of the corners!). I found that I had to devise new pathways for the couching, and use more short lengths. This panel is markedly more fluffy on the back than the gold one was!

I just have miles of that cloud filling stitch variation to do now (and, of course, choose and apply the braided edging!). The background stitching will help to throw the silver crest into relief. I have laid the completed gold over the silver so that you can see. With decent lighting, it should have enough personality to hold its corner.

If it doesn’t, I will frame it up as a separate panel, and show people just how difficult it was!