Experiments with A Marudai

Home | Dreams of Amarna | Experiments with A Marudai 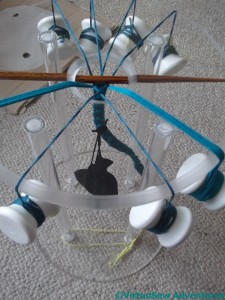 I’ve been fascinated by Kumihimo braiding for ages. I first heard about it many years ago from a mathematician friend of my husband’s. Quite why, I can’t now recall, unless it was a desperate attempt on the part of the mathematician to find something textile-related to talk to me about.

Jolly decent of him, don’t you think? He certainly had no idea what he was starting..

Anyway, I’ve heard a lot about it, and rather like the effects that can be obtained. In the UK, the best source for information and equipment is Jacquie Carey at The Carey Company. Jacquie has also become better known to historical embroiderers because while she was researching historical braids she became fascinated by the stitches in them, and besides her books on Braiding, she has now written books about Elizabethan Stitches (remember my experiments with some of them for the Glittering Nightcap?), and Sweet Bags! 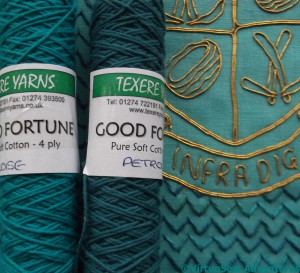 I’ve bought myself an acrylic marudai and bobbins, and spent a fascinating – not to say, bewildering! – couple of hours at Texere Yarns in Bradford, trying to find some suitable yarns to experiment with.

Since my initial aim is to create a braid edging for the Crest for the Dig, I began by finding some cotton knitting yarns that seem to go very nicely with the panels, as well as a whole load of extra yarns for additional experiments.

Then I started playing…!