Getting Back To The Tudor Rose

Home | Goldwork | Getting Back To The Tudor Rose

What with one thing and another – largely to do with the Hittite Amulet and the consequent overdose on metal threads – the Tudor Rose has been snoozing quietly in a boxfile for months, not drawing attention to itself.

I’ve decided, however, that it’s time it got finished, so that I can move on to other things, and the first step was to complete the white and silver petals of the rose.  I was puzzled and confused when I did my first petal after the break, because it didn’t present the same appearance as the other ones. Can you see why?

I’m going to leave it like this, to remind me to pay attention next time… 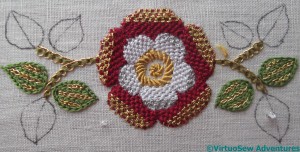 The next stage was to work the bullion knots in the centre. I’ve decided (again, not quite following the order of stitching in the instructions) that I’m going to leave the cut pieces of purl until everything else is done, so having done the bullions – with varying degrees of success, I admit! – I moved back to the leaves.

So, onward and forward, as my Grandad used to say… 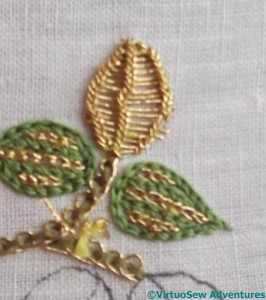 Some of the leaves are worked in Ceylon Stitch which is then woven through using the silk thread. Those of you who were reading my blog when I was working on the Tudor and Stuart Goldwork Masterclass may recall that I found Ceylon Stitch something of a trial. Working it in leaf shapes really doesn’t make it any easier!

There are three more of these, two each to be woven into with different colours of green Soie Perlée. Tricia says to pack the weavings in as tightly as possible.

We’ll just have to see how that turns out, won’t we…