Crock of Gold Hoard – A Surprise in the Photo

I’ve been working on the Crock of Gold Hoard for months, now, with the photo or even an enlargement of it, close at hand at all times. My mother and I even spent several hours staring fixedly at the photo while we tried to sort out the shadows. 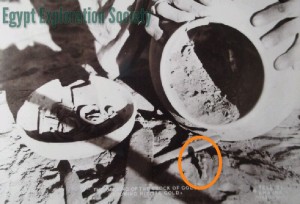 During all that time, something has been nagging me. Mary Chubb mentions that in one of the photos they took at the time of the discovery, the Hittite Amulet was placed in front of the Crock, rather as it had been on top of the Hoard for all those centuries before. And in all that time, with all that staring, I never found it.

And now I have – circled in orange here. In fact, now I’ve found it, I can’t not see it, but since it took me so long to spot it, I thought a bit of help might be in order for my readers! 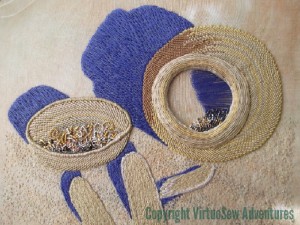 And here’s the update on progress. I’m working slowly, a bit at a time, on the chipwork inside the Crock. The tarnished silver purl is creating just exactly the effect I thought it would, because the tarnishing hasn’t been even, allowing just the occasional glint to show through.

What I’m still not sure of is just how far I need to go to get the effect of the Hoard still within the Crock, which is a matter of some concern to me, because I don’t have an unlimited supply of tarnished purl.

Oh, and there is the other question – do I even attempt to represent the Hittite Amulet at this scale? I’m going to work it in or nue, as a separate piece, and as the embroidery is only about the size of a postcard, the Amulet would only be about a centimetre high, and if it goes wrong and needs unpicking it will probably leave a blemish.