More Progress on the Elephant of Infinite Charm

I don’t work on the Christus Natus Est panel in the evenings, so I have been making progress on the Elephant of No Distinction But Infinite Charm. Slowly, because he has been proving obstreperous! 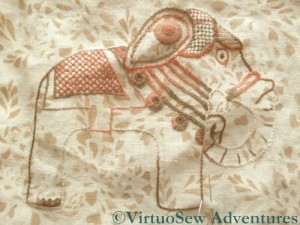 Progress on the Elephant of Infinite Charm

I’ve added a second row of cable chain stitch around his ear, and worked a single large roundel of spiral trellis stitch to embellish it. The spiral trellis is a very thread-hungry stitch – I think it used four or maybe five lengths, but it was well worth it. I was careful to bring the new end of the thread in using the end that the previous thread had just finished on, so that the blocks of colour in the variegated thread flowed smoothly rather than jumping about. 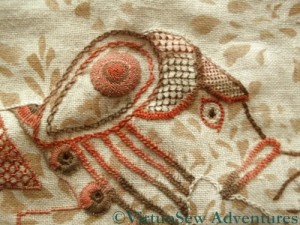 The Headcloth of the Elephant of Infinite Charm

You can see in the close up that I’ve used a pulled-work stitch for the Elephant’s Headcloth. I’m not sure which scale I prefer so I may just leave it as it stands. I wanted those sections to be covered, rather than open, but not completely solid. I think it’s pretty successful, but I intend to stare at him for a little while now, while I try to work out how I am going to work the anklets on his legs.