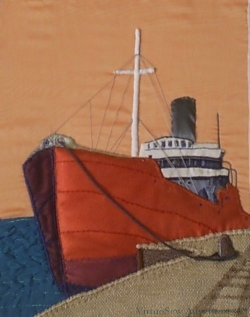 There were a few final details to be added to the panel while we discussed the wording of the border, and tracked down suitable materials for working it. These are things like the radio mast and framework beside the superstructure which were worked in a mid-toned, matte grey cotton. The radio mast is in broad chain stitch, which produces a smooth and heavy line, while the framework is in whipped stem stitch which produces a more rounded effect.

Then even more importantly, there was the mooring line. In reality there would be one fore and aft and possibly another amidships, but there is such a thing as too much accuracy!

I tried several ideas, such as crochetted single chain, or even a heavy, single thread, but I finally made the mooring line with mid grey pearl cotton, using a lucet. This is an ancient technique which produces a strong, square braid. It was looped twice around the bollard (which is layered with gauze and padded), and then the free end was whipped to the standing end to simulate the looped cable that would be the first thrown to the quay on mooring. It is only attached at the ends (that is, where it is lead through the scuttle at the bows, and by the bollard about which it is wrapped). That means that it hangs in a fairly natural curve, although it is also both heavy and stiff enough that it has held that curve through the process of framing and transport of the finished article.

Can you tell that my grandfather, too, was a Master Mariner?