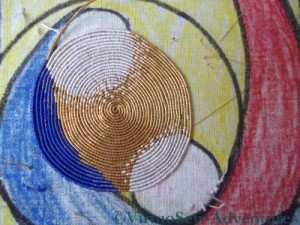 Since I’ve received so many comments – and additional e-mails! – asking me to post more about Christus Natus Est, I’ve decided to post about it more frequently than I originally intended.

Progress has slowed somewhat as the spiral gets larger, with ever-longer sections of the close silken stitching. Since I’m using two shades of blue at present, the blue of the Madonna’s robe involves three different threads, which means that every time I feel I’ve settled into a rhythm, I have to stop and change to another thread.

I’ve already had to reposition the fabric on the frame, since the constant close stitching had stretched it slightly. It’s much easier to work this style when the fabric is absolutely taut, so I expect that this will become a regular activity!

You’ve probably noticed that the Christ Child’s halo has a somewhat sawn-off look, and that I’ve not continued the Madonna’s halo over her robe. In both cases, this is because I have taken note of what one of the books I’ve been reading has told me – it is not difficult to add stitches to an or nué piece, but it is near-impossible to take them out. I’m not certain that I want the halos to spread over the robes, so until I’ve decided that, they won’t.  I’m happy to go back over the piece tidying up when I’ve finished, so that is how it will be done.