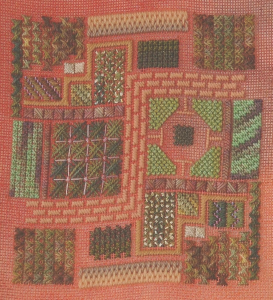 Following on from the Knot Garden, I decided to play a little more with the idea of using the canvas as a background, rather than covering it entirely. Since I already knew the canvas would not be covered, I chose a piece of dyed canvas (from “Kate’s Kloths”, which I haven’t been able to find online).

The first element was the simple path in expanded brick stitch, worked in wool. The rest of the panel was then built up as a pattern of varying stitches and threads. There was no predetermined idea, simply the aim of keeping a sense of balance and rhythm in the pattern densities. You will notice that block sizes and shapes are repeated, reflected across the path which snakes across the centre.

I’m not particularly comfortable with abstract work or even with designing it, so this repetition and reflection of the blocks was a way to give myself a structure for the piece. Otherwise I find abstract work often feels rather chaotic and it doesn’t offer me the chance to puzzle out “a good stitch to represent such-and-such”, which is where a lot of the fun of the Persian Fantasy came from.

This was an interesting exercise, but like the Knot Garden, it has remained as a piece of canvas, not mounted, framed or incorporated into anything, because I really haven’t a clue what to do with it!