Steps in the Sun

Some years ago, I was asked by a magazine to design “my interpretation of buildings” in counted work. I produced three versions of the same thing – a set of steps in a Tuscan village, with plants in pots on the steps and a window looking over them. Then the magazine didn’t use them. Any of them. Sigh.

Never mind, I enjoyed doing them, and it was a very interesting exercise. 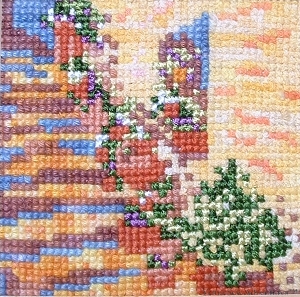 The colours are inspired by Monet’s Rouen Cathedral series – strong, bright colours with purples and blues as the shadows. They are like impressionist oil paintings in another way, too – it’s not always entirely clear  quite what the shapes are until you have looked for a while.

For Version One I used counted cross stitch in space dyed and other threads. The walls were worked using a cotton bouclé, and the steps in a range of soft unmercerised cottons. The terracotta plant pots were worked in stranded cottons (solid colour), and the plants themselves were worked in rayon, also in solid colours. The threads were rather heavier than stranded cottons, so I used 22 count linen and stitched over two threads. The bouclé battled every stitch of the way! 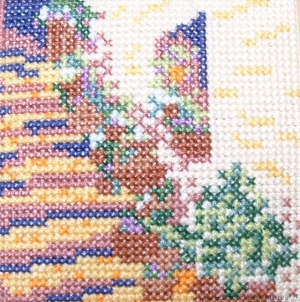 For Version Two I used plain counted cross stitch in stranded cotton, chosen to reflect the colours of the overdyed cotton as well as I could manage. It is strange to see that the photograph gives the impression of the aida fabric showing through, which isn’t so obvious to the naked eye. This version actually is more successful in some ways than the first one, although I have them all three on the wall and I actually prefer Version One! Version Two is not so hectic, but still, it doesn’t “read” as clearly as I might like. Or at least, not to everyone. I see the steps in all three, but I know people who don’t. 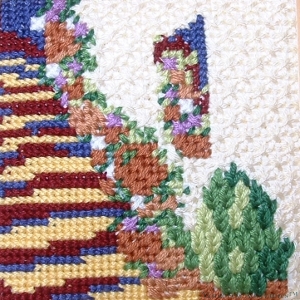 Steps in the Sun using canvaswork stitches in stranded cotton

In Version Three I became even more experimental – I knew the magazine wouldn’t go for this one, but thought it would make an intriguing exercise. The base fabric is ordinary aida, but I chose to use canvaswork stitches in stranded cotton. The bush in the bottom planter is worked in Leaf Stitch – oh, look, Leaf Stitch again! – and the steps are long-legged cross stitch. The wall is Double Straight Cross Stitch. I enjoyed this one the most, but at the scale of the piece (it is less than four inches square) there really is not enough space for most of the stitches to do their work properly.

An interesting exercise, all the same..