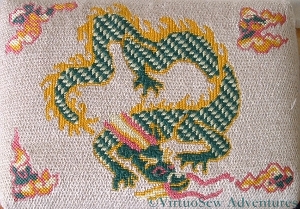 The Dragon Footstool I worked for Grandmama

I think that this was my first reasonably large canvaswork project, worked very early in my stitching career. The design was in the Readers Digest Encyclopedia of Needlework,  which is a very good general introduction to a lot of styles of needlework, but needless to say, even at that early stage I made changes to both the design and the materials.

The Readers Digest suggested plain canvas  – on the advice of my local needlepoint stop, I used interlock. The project pages said Tapestry wool – again, on advice, I used Persian Wool (lovely colours, and a really gorgeous sheen). They said Tent stitch – ah well, you can guess what’s coming, can’t you! Oh, and the colours were all changed, too. I did paint the design onto the canvas, using my mother’s  oil paints, but after that, almost all resemblance to the project in the book ended. 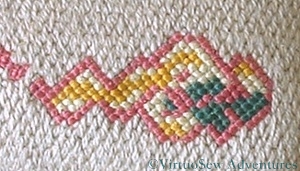 Corner Motif for the Dragon Footstool

The ornaments in the corners were worked in Upright Cross Stitch, which creates a surprisingly heavy texture for such a relatively simple stitch. Looking at the design now (after my grandparents died, the footstool came back to me) I rather feel that the original designer didn’t quite think things through. The corner motifs are all at different spacings from the dragon, and somehow the whole thing looks a bit congested. I think they may have designed for the round footstool bases that were popular at the time, and then added the corner motifs to make it more interesting for those who wanted a rectangular one. Nowadays, of course, I would try to have the courage of my convictions, and remove something or change the spacing, or alter the motifs to create a more pleasing effect. But a printed book looks so authoritative, doesn’t it – not for experimentation. One lives and learns! 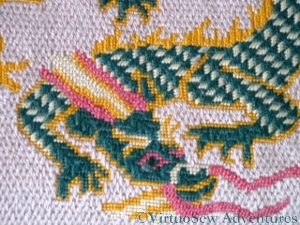 The scales on the dragon’s body were worked in Oriental Stitch, and the spines on his back in Kelim Stitch, worked vertically instead of horizontally. Small details like eyebrows and outlining were worked in tent stitch (I do occasionally make the simple choice!). The trailing beard and horns were worked in rows of Knotted Stitch.

I don’t think I would use the same stitches again, or at least, not in all cases. I think the Oriental stitch is at the wrong scale for the dragon’s body – it was certainly a nightmare to get the compensation right! – and the beard and horns in fact need a heavier and more distinctive texture. The Kelim Stitch spines work well, I think, and the corner motifs in Upright cross stitch are successful too. I hadn’t, at this point, worked Slow-and-Steady, and although pictures of the worked stitches give you an idea of the worked appearance, it really isn’t the same as having done it yourself.

Still, it was fun, and interesting, and at the time, Grandmama said she was very impressed!

View all posts by Rachel
The Felucca Is Finished →
← Commission Completed: Client Captivated!