Quick update on the Spot Sampler 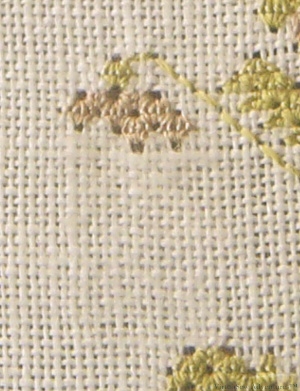 I miscounted some of the stitching on the central motif of the Spot Sampler we are doing in the Tudor and Stuart Goldwork Masterclass – cue much muttering and swearing – so when I had convinced myself that I really did need to unpick it and re-stitch it, I was rather anxious. Some fabrics never recover from the first stitching, and I felt that there was a very good chance that the pulled Queen stitches would be pretty much impossible to recover.  Furthermore, Queen stitch is the most difficult to unpick that I have ever had to wrestle with. Especially at this scale. I ended up using a laying tool and a seam ripper, with my heart in my mouth in case I cut something I shouldn’t.

And yet look at it. It’s hard to tell where the stitching was, and even unpicking with the laying tool hasn’t done much harm. I’m very impressed, and greatly relieved. 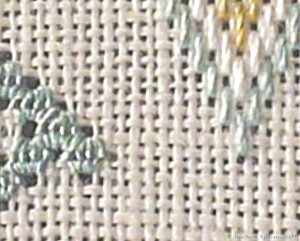 I also noticed something in stitching the beginning of the bargello section I started while I was thinking about restitching the central motif. The lowest row of the bargello section and the Queen stitches just beside it are worked with the same colour. The differing light reflectance on a straight and uninterrupted stitch, in comparison with an angled stitch which is interrupted by a tyeing stitch has actually made about two or three tones difference in the colour as it appears. I knew about this effect, but it is the first time I’ve seen it demonstrated quite so clearly.

This sampler is teaching me a good many things in addition to the stitches!

View all posts by Rachel
Stripes! →
← Did You But Hear My Lady..?