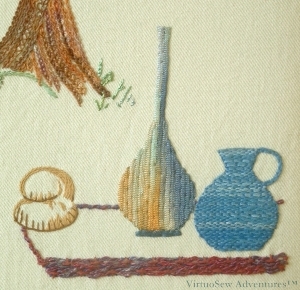 I enjoyed working on the prince’s picnic on panel four. The tall carafe is created using a variegated knitted ribbon (from Stef Francis), and has been used as if appliquéd. The inspiration here was those strange lustre-glazes that show widely differing colours in different lights, and I had great fun choosing particular sections of the yarn to create the effect. The blue jug is much more homespun (sorry – couldn’t resist!), using a Soft Cotton, this time inspired by coiled clay pots – a technique I remembered trying at school, although it was much easier in embroidery! Then there was the loaf of bread, using three shades of a plain matte, round cotton yarn, and the rug (or table – I’m not sure which) bordered with a complex border stitch in a strongly textured yarn. 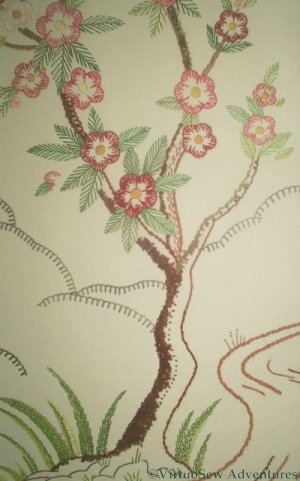 The Flowering Tree on Panel Three

The bark of the flowering tree on Panel Three was worked using various bouclé and other effect yarns, couched to the surface randomly. The basic design is so stylised that I was careful not to be naturalistic. I used a variety of yarns from a Texere Yarns Inspirations pack and caught them down with a single strand of stranded cotton, in loops and wavy lines. The flowers and leaves were working in plain stranded cottons. The flowering tree was already so dominant in the panel that it really didn’t need much in the way of emphasis from the yarns other than the bark. The tall grasses at the foot of the tree are in stranded cotton too, using feather stitch. I’m not sure that I would do this panel in the same way now, although I think that using satin stitch and long and short stitch, as in the original, might make it look a little serious, rather than decorative and fun.

And I wanted it to be fun.