Thinking about the stag for the Vision of Placidus 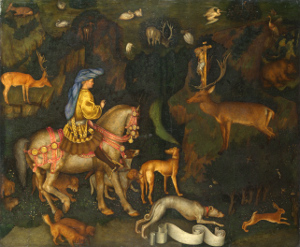 Pisanello “Vision of St. Eustace” in The National Gallery, London

I’ve already mentioned that, although I have more yet to do on the Dreams of Amarna, I have little thoughts, now and again, about my plans for the next Really Big Project, the Vision of Placidus, inspired by Pisanello’s “Conversion of St Eustace”, Elizabeth Goudge’s “Herb of Grace”, my mother’s fine binding of “The Wind in The Willows”, and the kingfisher I saw at Flag Fen. Oh, and the “Chasse a la licorne” tapestry in the Musee de Cluny. 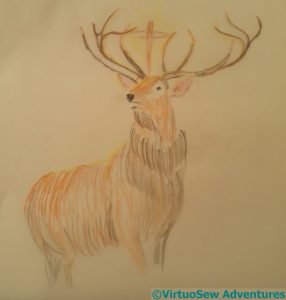 Based on the Stag from Landseer’s The Monarch of the Glen, with an attempt at

The Stag with the crucifix in his antlers is going to be the major character, and while I know I’m tearing into a genius of the past, I think Pisanello’s stag is a bit too tame for the story…

My first thought was to start from Sir Edwin Landseer’s Monarch of the Glen. After all, he’s full of personality and presence, and a recognisable figure to add to the layers of meaning and reference. But no, I think the crucifix won’t settle well into the antlers, and the pose isn’t quite right, either…. 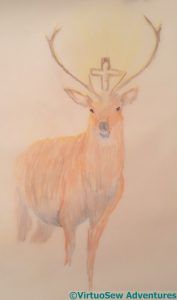 Second attempt at a stag with a crucifix between its antlers

Then I spent more time rummaging online for pictures of stags, and came up with another to try. I like the challenging, direct stare of the pose here, but it puts the onlooker in the position of Placidus (according to the stories, he took the name “Eustace”, or more probably a Latin variant thereof, when he became a Christian), and I want Placidus to be in the picture. That said, he was a second century Roman, and I’m intending to dress him in florid fourteenth century dress, so don’t expect too much accuracy…

My next thought came from a book about the landscapes of Capability Brown that I bought for my cousin for Christmas. I’ve told her about the plans for Placidus, and she opened her gift, leafed through it, and then turned the book to me and said “Would this help?”

Third attempt at a stag with a crucifix between its antlers 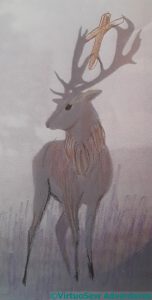 Fourth attempt at a stag with a crucifix between its antlers 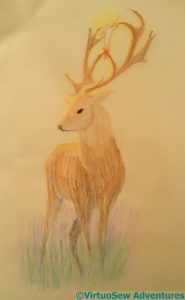 Fifth attempt at a stag with a crucifix between its antlers

This is by no means the first time my cousin has helped me with design planning – it was talking to her that enabled me to crystallise the ideas for the Dreams of Amarna – and I like the photo enough to have three attempts at it. I still don’t think I’ve got it right. That said, all of these sketches have allowed me to think, not just about the pose, but about how I will use my threads to create the effect I want, of the illumination in the scene emanating from the crucifix.

A good use of time, even if not a stitch was set!