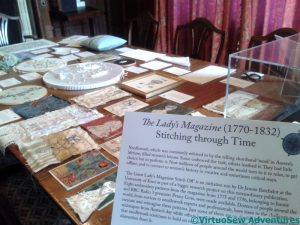 You may recall that I’ve written several times about the Great Lady’s Magazine Stitch Off. A good many of us found our Twitter timelines more fun and more colourful for several months, while we played with the designs and watched each other play with them. Some of those pieces (including my pashmina) then went on display at Chawton House Library, as part of their exhibition “Emma At 200“.

And last week, I finally got to Chawton House to see the Exhibition! 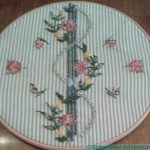 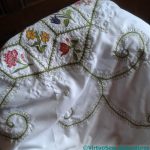 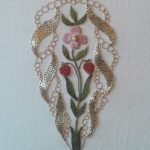 Chawton House itself is interesting, but instead of being simply a respectable country residence, it now houses a library which is a genuine scholar’s resource, as well as containing displays about women writers and even one about Jane Austen’s publisher (a man she described, in a letter to her sister Cassandra, as “a rogue, but a civil one“). 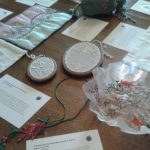 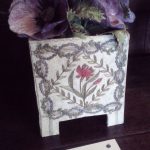 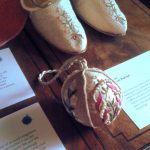 And a wonderful, oak-panelled room, full of Stitch Off delights. I was particularly pleased to find that everyone’s pieces looked better than when I saw them on Twitter, accompanied by apologetic indicators of Where I Went Wrong. There were exquisite renditions in period-appropriate techniques and materials, and there were completely different pieces using modern techniques and materials, some even machine stitched using computer controlled sewing machines, some finished pieces, and some simply presented, either laced over card or even still in the hoops they may have been worked in. They all looked wonderful – a real treat! 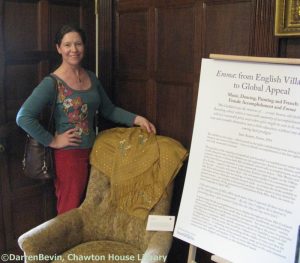 Me with my pashmina, photographed by Darren Bevin

And I found my pashmina, draped over a chair….

The photograph was taken by Darren Bevin, the librarian at Chawton House Library, and has already appeared on Twitter. We missed a trick, in fact – I should have picked it up and swept it around my shoulders, as I will when I get it back again!