In “Nefertiti Lived Here” Mary Chubb describes excavating a necklace, and being reminded of a bead necklace she had as a child, partly by the delicacy of the necklace she was working on, and partly because the fact that she had no idea where it had gone gave some insight into how the excavated necklace could have been lost in antiquity.

Of course, she didn’t describe the necklace very much – she only said it had daisies on it – but I want to include some trails of daisy embellished lengths of beading, hanging off the edge of one of the Dreams of Amarna panels. Beadwork is not a technique I’m very familiar with, so it’s yet another adventure into the unknown! 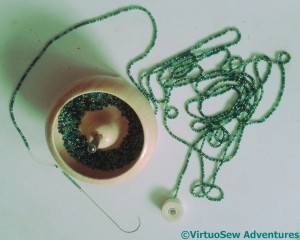 I wanted to make sure that there was some variety of colour in the green strands, and I used this “bead-spinning” pot to thread a random selection of green seed beads onto a strand. I got a little carried away here, because it took me some time to get used to the technique. I discovered that, strongly right handed though I am, it was more successful to hold the needle in my left hand, and turn the spindle with my right. In the end I had at least a couple of metres of bead strand waiting to be used, and I still have a metre left! 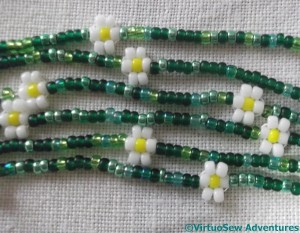 Close Up Of Strands

Here is a close up of the beaded strands I have created, with very simple bead daisies interspersed with lengths of the green beads. I’m rather pleased with it. It has the sort of delicacy that would have been considered suitable for a little girl in the early years of the twentieth century, and I can just imagine a small Mary gleefully rattling her beads and feeling very grown-up!