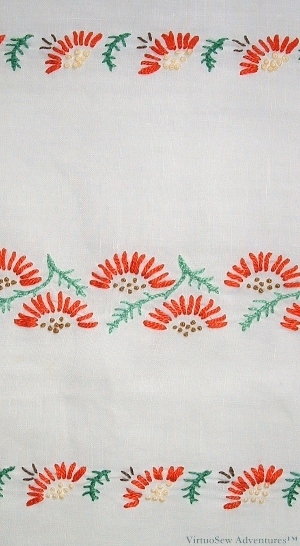 Table Runner from The Needlewoman Magazine

I worked on this very early in my embroidering career. The design comes from a free transfer in one of the Needlewoman Magazines my Grandmama gave me (September 1934, since you asked!), and I worked it to go with the curtains in my bedroom which were a wonderful Regency strip in red and gold. It’s a table runner – I used it on my dressing table – and it is very nearly two feet long.

The original article to accompany the transfer described  several different colourways and a whole range of sketches of suggested uses. There was the idea of sprigging (organdie) curtains with the single motif, embroidering a sunshade, a bag (linen), a luncheon set, gloves, embellishment on the brim of a hat, even on a nightdress or slip (silk of course!). Sometimes I wish I had lived in the Thirties!

I used some fine linen – essentially altar linen, a fine even-weave, nothing fancy, and embroidered it using pearl cotton. As you can see from the close up, pearl cotton really was rather too heavy for the fabric, but then I liked it at the time, and if you don’t like what you’re doing, it tends to take longer to finish. 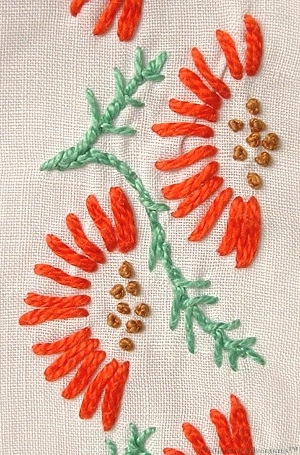 I should have had the courage of my convictions and worked the French Knots as seed stitches (I hated French Knots at the time – possibly because I wasn’t very good at them). There are only three stitches – straight stitch, stem stitch, and French Knots, so it was very easy and simple to work.

I simply had to keep going at it. That’s when I discovered that I’m not very happy doing repetitive embroidery!

And – in case you are interested – although the linen was old when I worked the embroidery, it has in fact outlasted the bedroom curtains…  They don’t make fabric like that anymore!