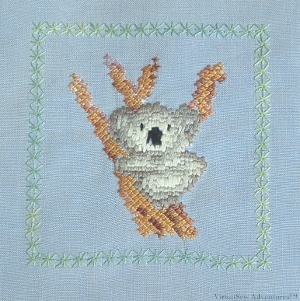 In fact this is worked on linen, but using canvaswork stitches. I was playing with some needlepoint charting software, in particular to find out how the stitches appeared on the chart and how easy it was to follow. I can’t remember where the Koala came from, whether he was originally in counted cross stitch or whether he was imported from a drawing. It is quite a simple design with relatively little modelling, and I’ve always been rather fond of it.

I used waste canvas to give me the stitch placement, and then simply worked the design according to the chart. The Koala himself is worked in straight stitches using stranded cotton, all six strands separated and made to lie side by side; the tree branch he is clinging to is worked in two shades of pearl cotton, using upright cross stitch (one of my favourites, as you know by now!), and the green frame of Algerian Eye stitches is worked in one of the Wildflowers threads from Caron Collection.

The embroidery has survived much better than the fabric it was stitched on. Originally I made a cushion cover, but the linen was already old before I started and now has holes in it. I’m going to do something with the Koala (suggestions please!) and then the rest will probably go into a rag rug…