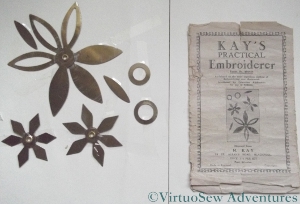 EBay is a very dangerous place…

I bought several more copies of The Needlewoman magazine on eBay when I first discovered it (eBay, that is!), and some of those magazines mentioned “a new style of embroidery” using metal templates. It was called Kay’s Practical Embroiderer. Some time later, a set of the templates came up for sale. Furthermore, I won the auction, so I can now experiment! 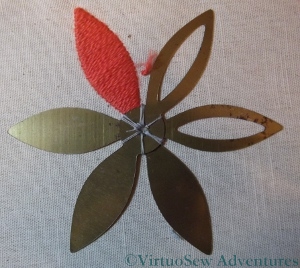 Getting Started with Kay's Practical Embroiderer

The templates are mentioned in passing in  the book Stitching For Victory (mentioned in my post about the teacloth that took three generations to complete), as a quick and easy method to create stylish embellishments using what was most readily  available – darning wool.

Of course, darning wool is almost impossible to find nowadays, but I have plenty of Paterna Persian yarn, so I am using that for this first experiment. It’s much fluffier and more springy than darning wool, so it won’t be exactly like the original, but I’m hoping it will give me some more ideas. It’s certainly making a huge change from the fine work I’ve been doing on the Spot Sampler! 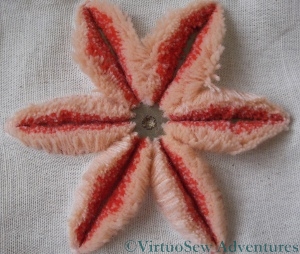 Snipping Away From the Template

So here is the beginning of my experiment. The idea is that there are several layers of surface satin stitch worked over the metal template. I have to say that I would tend to quarrel with the idea of this being a quick technique. As I made progress and added each of the layers on to the petals, it became more and more difficult to to make the stitches. In fact, I made copious use of a needlgrabber (which did help, very much indeed), and frequently broke the thread. I wonder whether that might have been partly because darning wool would have been stronger and more tightly spun than the Persian yarn, and also, perhaps, because the darning wool would have been finer. The instructions say to use two strands of wool in each layer, and I’ve done so. I’m still wondering whether that was right, although I am rather afraid that if I were to use a single strand it might look a bit half-hearted.

Once the stitching is complete, you snip down the centreline of the shape (not easy, even with my very special sharp embroidery scissors), and end up with a raised, furry shape. Finish it off with a few lines of ordinary stitching, and you have a very textured, striking piece of work. The leaflet has a selection of suggested designs and ideas, and it will be interesting to see whether I can manage to devise ways to use the ideas in new ways.