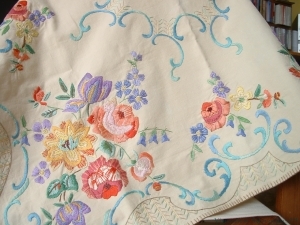 The embroidered teacloth that took three generations to complete!

This heavily embroidered teacloth was begun by my Great Aunt. She either became weary of it or simply felt it she didn’t have time to do it, and she passed it on to her god-daughter.

Who in turn, finished all but a small bit, when she ran out of suitable stranded cotton to do some of the curlicues. And then she passed it on to her god-daughter – me!

I worked something out for the curlicues, and finished the embroidery. And then – Surprise!

I’m reading a book at the moment called Stitching for Victory. It is a fascinating account of the contribution of fabric and stitch to the war effort. It covers tents and uniforms, the Utility mark, Maskelyne‘s misleading camps in the desert, Make Do And Mend. It describes ideas for refashioning and remodelling garments, and repurposing blankets, parachutes and darning wool.

Imagine my surprise when I turned a page among the colour plates and found myself face to face with a teacloth embroidered in a familiar pattern. … It turns out that it was a Penelope kit, and was among those used in rehabilitation of  injured soldiers during and after the War!