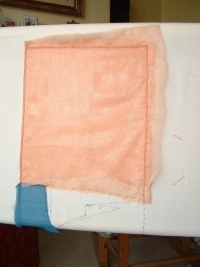 Gauze doubled over the sky

I finally decided that I wanted to use two layers of gauze for the sky. The apricot gauze has a slightly reflective surface, which would make the sky glow behind the ship.

I also worked blanket stitch around the outside edge of the panel. At this stage I intended to use a raised band stitch of some sort to frame the work, so the blanket stitch was to form the foundation of the final raised band.

Later I was to discover that the Camberwell herself had Other Ideas, and all of this was completely changed.

I think it is important to show some of the dead ends I investigated here, or at least to describe them. One thing that people who are at the early stages of their creative life always assume is that everyone else gets straight from “Germ of an Idea” to “Finished Design” without really passing through any points in between.

And we are not fair to them – and risk discouraging them – if we allow them to think that we do. 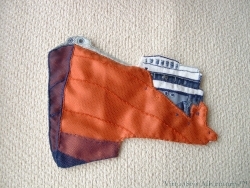 This next photo shows further progress on the slip for the hull, in which I worked on the superstructure of the bridge and living quarters. I pierced the cotton drill where the anchor chains are lead through the hull and worked one of the portholes on the bridge in a raised satin stitch boss. Almost all the actual embroidery here used ordinary stranded cotton, although sometimes I blended colours in the needle.