Stitching the Persian Fantasy – One

I’m glad to say that stitching the Persian Fantasy screen was just as much fun as I hoped it would be! I didn’t follow the instructions in the magazine, not least because it called for “Anchor Flox” , and no-one I could find even knew what that was!  I’ve since discovered that it was a very shiny thread, something like a pearl cotton, but made of rayon. I was going to stick with a single type of thread, and conventional stitches, but my mother suggested that I should Be More Adventurous, so I was.  I have been grateful to her ever since, as I had enormous fun playing with the threads and stitches.

It is very stylised, very Thirties, but clearly inspired by early Oriental silk paintings. I have a couple of modern ones in a similar style, in fact – inherited from Grandmama, along with the lacquer box! 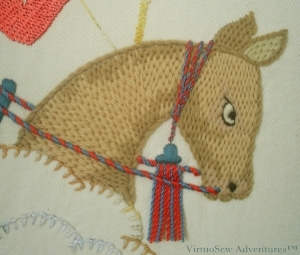 The Prince's horse, staring fiercely at his quarry

My knowledge of horses is limited to the direction in which they are going, but I remembered hearing from my horse-mad cousin that horses can get pretty shaggy, and that the lovely glossy look you see on a racehorse is due partly to the horse having had a good haircut. So when I came to do the prince’s steed on the first panel, although I didn’t want him glossy (I wanted the Prince to be glossy), I did want him to look cropped rather than shaggy. So I chose tapestry wool and brick stitch, slightly bent to follow the direction of the coat. I gave him a darkly staring, focused eye, like a warhorse on the Bayeux Tapestry, and matched his reins to the Prince’s clothes, using two colours of Anchor pearl cotton, matching the two colours of Anchor Marlitt rayon thread, twisted together to create cords. The fringe on the headpiece was created using twisted single lengths of pearl cotton, the raw ends plunged and the twisted cords hanging free. I’m still pleased with the horse, and I don’t think I would do him differently now. 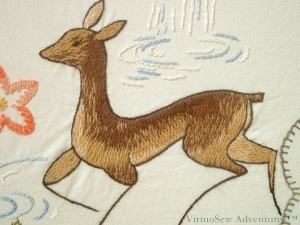 The running Gazelle on Panel Two

The running gazelle on the second panel makes a very good contrast with the Prince’s horse. She was worked using long and short stitch in Paterna crewel wool, with some mixing of colours in the needle, and I quite explicitly aimed for a slightly ragged look around the haunches, although in keeping with the very stylised feel of the whole design, I worked a neat, careful, dark outline of stem stitch. I particularly like the way the designer has made her very clearly a design, not an animal portrait, but at the same time, the single lines for the lower legs are so very reminiscent of the fragile-looking legs of gazelles and other deer. 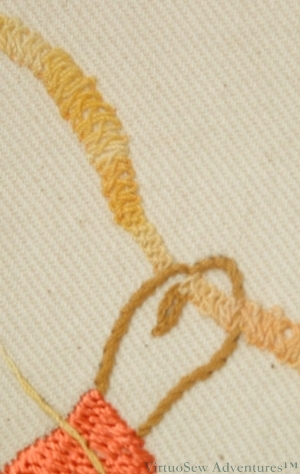 Part Of The Bow, Panel One

The Prince’s bow is worked using Braid Stitch, using a mercerised variegated cotton. Archaeological and historical records show that the ancient bows could be very highly decorated while still retaining all their power as a weapon, and I was thinking of descriptions I had read (archaeology is another interest of mine) of bows using horns as the ends, and laminated wood (lamination was invented earlier than you might think) for the main section, all decorated with gold wire inlay. Naturally, all you can see on the embroidered bow is the inlay!

View all posts by Rachel
The Cat Who Walked By Himself →
← Squeaks with Excitement!