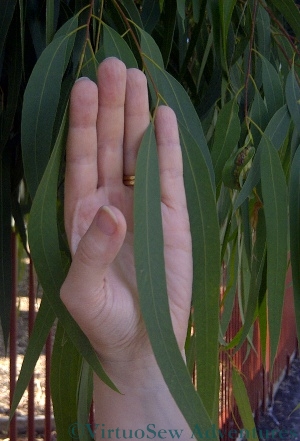 One of the hallmarks of Australian Embroidery, as shown in the magazines, is a willingness to mix techniques and “play”. So while I have no idea of how I am going to show the Rosella, I’ve been thinking in terms of creating a background of tessellated Eucalyptus leaves, one way or another. There are several ways this could be achieved, which would be to some degree in the spirit of what I have read, and I still haven’t worked out which to use. Although I hate working samples, I may have to do so this time, as I haven’t the faintest idea whether they will work!

Gosh. When I sat down to write this, the last couple of ideas hadn’t come to me at all! That’s one of the unanticipated benefits of blogging, because in sitting down to explain what I am doing, or planning, I concentrate so much more on the subject that I get even more ideas, and what’s more, I’ve got them written down, so when I actually get to that part of the project, I have my notes – often illustrated notes!  – to help me reconstruct my ideas.

It would be nice to work this while I’m actually in Australia, using Australian sourced materials, so I think I need to spend more some time planning the project before our next visit. 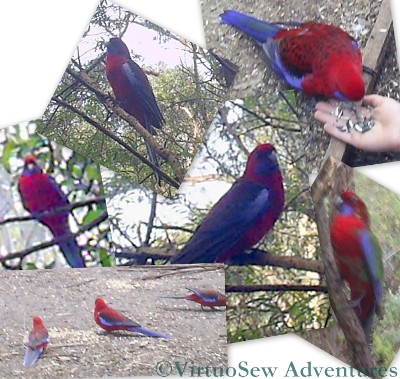 My life and personal circumstances are not often relevant to my embroidery, but in this case…

My husband is Australian, so we try to go to Australia to visit his family as often as we can, which is usually about every two years.

To someone brought up in Northern Europe, among the Oak and Ash and Thorn of Puck’s England (do you know “Puck of Pook’s Hill“?), the blue-green foliage of the Eucalyptus is a strange sight, and strolling through a reserve amid the smell of eucalypt and tea tree, spotting kookaburras, koalas and kangaroos, is an experience which never becomes over-familiar.

In addition, the Australian embroidery magazines have a completely different focus to those in the UK, and a huge variety of styles and projects, like nothing I see at home.

So perhaps it is not surprising that, although I haven’t yet worked an Australian project, I have a huge collection of photos I’ve taken as inspiration, and magazines I’ve bought to read, and re-read, and – frankly – gloat over. I’ve a book about working Australian flowers in Stumpwork, and one of these days I intend to work a bouquet of them…

In particular – being accustomed to rather more dun-coloured  birds – I’ve been rather taken by the idea of working something depicting, or inspired by, a Rosella.  I took a lot of photos on one of our visits a few years ago, and, as with all of my projects, I’ve been thinking about it on and off ever since.

During our visit at the beginning of this year (we had New Year’s Eve on the beach!), some of the ideas began to crystallise out a little more, and I have been writing them down to make sure I don’t lose them.