The Glittering Snail Ornament from Stitching A Snail For Storage is Finished!

He was a lot of fun to stitch.  I was introduced to silk gimp and silk purl (as I’ve already said, I don’t know what I will use them for, but I’m sure I’ll find something!). I don’t think I’ve ever stitched anything quite so small, either.

Tricia provided the blue silk thread to make the cord, and a silk fabric to back the ornament, although I think I need more practice at making cord, since mine ended up a bit floppy! However, it has now ended up with the whole thing, from hanging loop to tassel, made from a single length of cord, and I am hanging it up in my living room to keep it from getting crushed.

My local art shop sells cutouts of mount-card, presumably for people to do papercrafts with, but I find they make perfect mounts for this sort of ornament. I used one card for the front and one for the back, lightly glued fine wadding to the card and then stretched the fabric over the top (using glue or thread to secure it, depending upon which seems most appropriate). Front and back are then held together and overstitched, and the stitching can be covered with cord.

I used almost exactly the same technique – on a larger scale – when I was mounting “Starbright” a couple of years ago. 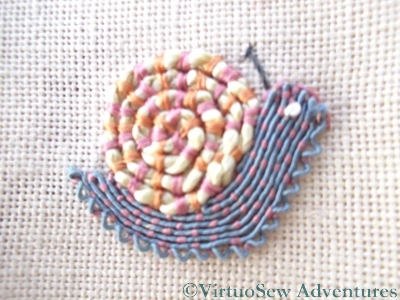 The Snail In Silk

So, bright-eyed, bushy-tailed, and full of enthusiasm, I sat down with my Glittering Snail Kit and got started. And, in fact, the silk gimp and silk-wrapped purl are not the only threads new to me, so it was great fun.

The pink and orange threads are both silk floss rather than spun silk. Occasionally I snagged the floss on the screw on the hoop, or a fingernail, or even on another bit of thread (how? don’t ask!), but I really enjoyed it, all the same.

The snail’s body is worked using the silk gimp and stretched silk-wrapped purl, couched with the pink floss. They were easy to work with – they felt gorgeous! – and I have a tiny bit left to play with a little while I think about how I might use them in my own embroidery. At the moment, nothing is really springing to mind, but I’m pretty sure that somewhere along the line some silk-wrapped purl will appear.. 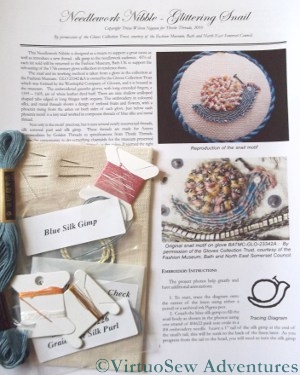 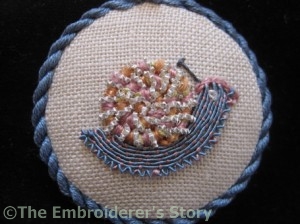