Further Adventures In The Abstract Garden 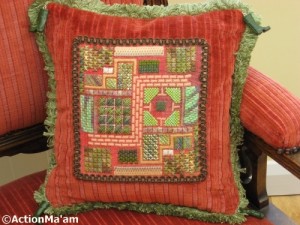 You may recall that I worked an abstract piece of canvaswork inspired by a vegetable garden. When I’d finished it, I didn’t like it very much, and really didn’t know what to do with it. However, my cousin (who comments here occasionally as Action Ma’am) did not suffer from the same problem. Not only did she like it, she knew what to do with it. I’ve asked her to write up what she did, and here’s what she wrote:

Having commented how the abstract garden canvas reminded me of my veg garden, I was delighted when Rachel offered it to me. I knew exactly what to do – it had already told me it wanted to be on a cushion for the armchair in the conservatory. My guess that the red of the canvas was the same as the red of the upholstery was spot on. 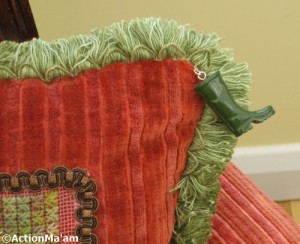 Close Up Of The Corner Trim

I don’t have a sewing machine, so Fiona my curtain-maker agreed to put the cover together for me. Not having done any needlework for many years, I was quite alarmed at the prospect of “getting it right”. Rachel and I had an email discussion about how to straighten the canvas and apply it to the velvet, handstitching it in place. To emphasize the garden theme, I had chosen some gimp braid to cover the edges of the canvas. The loops of the braid echo the hoops of the iron edging you sometimes find around borders in posh parks and gardens. I also chose some green fringe to define clearly where the cushion ended and the chair began. 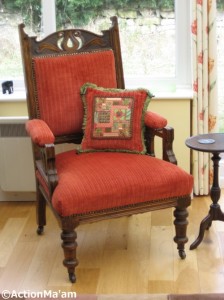 The Cushion On Its Chair

Whilst I was still thinking about getting started, Fiona phoned to say she could deliver a bedspread she had been making for me the next day. This was too good an opportunity to miss. I took the afternoon off work, a deep breath, gritted my teeth and leapt in. The stripes on the velvet helped in getting the canvas straight, the braid hid the edge of the canvas, and two hours later, it was ready for Fiona.

Whilst the cover was away being made up, I found a necklace in an accessories shop, with a green wellington boot charm on it. I bought four as a finishing touch.

The abstract garden canvas is now a happy cushion, nestling into the crook of the chair arm, and kicking its welly-booted heels in the air. I don’t think the chair intends letting go of it any time soon!